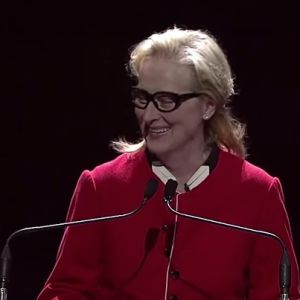 Meryl Streep introduces Hillary Clinton at the 2012 Women in the World conference in New York.
News

Will Political Movies Matter in 2016? Do They Ever?

On March 10, 2012, Meryl Streep stepped onto a stage at New York’s Lincoln Center for the Performing Arts and delivered a speech in tribute to Hillary Clinton.

The remarks were an introduction for the then-Secretary of State at the annual Women in the World conference, and Streep began them by confessing that she — like “every living American woman” her age — had thought about how her own life compared to Clinton’s.

“I find a lot of similarities,” the actress told the crowd, drawing laughter as she pursed her lips and pointed her chin upward with faux insecurity. “We’re roughly the same age. We both have two brothers. … We both grew up in middle class homes with spirited, big-hearted mothers who encouraged us to do something valuable and interesting with our lives.”

Streep explained how she and Clinton each rose “from public high schools to distinguished women’s colleges” and attended Yale for graduate school. But that, she said, was “where the two paths diverged.”

The truth is, Streep and Clinton are women living parallel lives, having become unparalleled icons in their respective fields. Yet the divergent paths of the actor and the activist, the performer and the politician, were particularly evident this past Wednesday, on the 95th anniversary of women’s suffrage. It got me thinking about the role movies play in our politics — especially compared to politicians themselves.

Wednesday saw Streep appear on a new poster for her upcoming film Suffragette. The film’s production company also released an accompanying video, urging the continuation of work begun by women’s equality activists more than a century ago.

“They ignited the movement,” the video declared. “We must keep it burning.”

Clinton also wants to keep it burning. In fact, you would’ve though she coordinated her Women’s Equality Day messaging with Focus Features. In an email to supporters, the Democratic presidential candidate wrote, “The women who won our right to vote didn’t back down in the face of jail or even violence. They changed our nation’s history by saying, our voices matter, and you have to listen to what we have to say.” Clinton then suggested that men and women could help “shatter the highest glass ceiling in America” by supporting her campaign.

The questions all of this put in my mind have to do with whether overtly political movies ever influence elections. Could Suffragette help elect the first female president? Will Oliver Stone’s take on Edward Snowden this winter change attitudes on national security? And what about next year’s HBO drama Confirmation, focusing on the Senate hearings for Supreme Court nominee Clarence Thomas? Wouldn’t an unflattering portrayal of then-Senator Joe Biden make a difference, especially if the vice president seeks the presidency? After all, those hearings addressed sexual misconduct charges against Thomas by attorney Anita Hill, and Slate’s Dahlia Lithwick recently wrote that “Biden, then-chairman of the Judiciary Committee, and the Democrats who failed [Hill] come out looking almost as bad as the Republicans who call her names.”

For an informed opinion on these matters, I turned to Andrew Lapin, a Chicago-based film critic who has written about movies for NPR, the Atlantic and many other publications. Lapin thinks the Suffragette-Clinton connection is a bit of a stretch, but he could see Confirmation used as a political tool, depending on how Biden comes across.

“The movies are about changing perceptions,” Lapin said in an interview. “They’re about slowly moving the needle of conversations.”

Hollywood filmmakers don’t generally try to influence specific political races with their work, but they do push for social causes, many of which are embraced by Democrats. One example Lapin gave was last year’s Selma, which won the Oscar for “best original song” with the track “Glory” by John Legend and Common. Those artists made an explicit link between the 1960s civil rights movement and the Black Lives Matter activism of today, speaking out on contemporary debates over the Voting Rights Act and criminal justice reform.

Still, mainstream movies aren’t always on the cutting edge of progressive activism. When I asked Lapin about Freeheld, an Ellen Page film about gay rights coming this fall, he noted that Hollywood would never have released anything like it a decade ago, when American attitudes had yet to shift in favor of same-sex marriage. “There’s leading the conversation and then there’s following the conversation, and you get a lot of the latter in Hollywood,” he said.

So in the end, for all the conservative hand-wringing, Hollywood probably doesn’t have much impact on our politics — at least in terms of the work it produces. The film industry may include major Democratic donors, but it’s not exactly shaping political debate one ticket sale at a time.

For her part, Meryl Streep seemed to have things in perspective during that speech she gave about Clinton three years ago. “I’m an actress,” the 19-time Oscar nominee said. “And she is the real deal.”