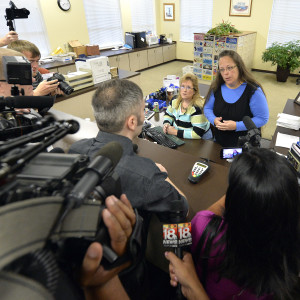 Americans are increasingly supportive of same-sex marriage, and that has raised concerns for Republican strategists as a number of the party’s presidential candidates continue to appeal to a Republican base that is out of step with general election voters.

According to Pew, 55 percent of Americans support same-sex marriage and only 39% oppose. This is a complete reversal from where support stood a decade ago. 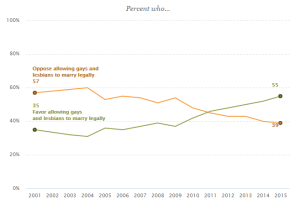 Support and Opposition to Same-Sex Marriage, 2001-2015 (Via Pew Research Center)

Strong majorities of Democrats and independents support gay marriage, although Republican support remains at only 32 percent.

That GOP opposition helps to explain why a number of Republican presidential candidates have continued to make gay marriage a wedge issue in the primary. While appeals to principle and religion, as well as support for Kentucky clerk Kim Davis, are likely to alienate general election voters from the GOP, legal arguments over the Supreme Court decision appear to be effective even with those generally supportive of the ruling’s outcome. This analysis comes from new dial testing conducted by Maslansky + Partners, a language strategy firm, in cooperation with InsideSources. 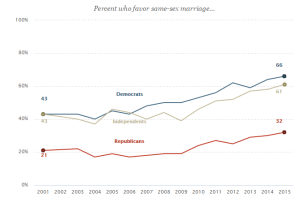 The dial session tested a segment of Texas Sen. Ted Cruz’s appearance on The Late Show with Stephen Colbert last week. During the interview, Cruz appealed to the Bill of Rights, specifically the 10th Amendment, reserving powers not mentioned in the Constitution to the states. While Cruz was booed by the studio audience, in the dial session, held in Los Angeles, Democrats and Republicans alike were supportive of Cruz’s call to win the issue at the ballot box rather than through five unelected lawyers.

Jenn Dahm Peterson, vice president at Maslansky + Partners, said she suspects no serious national politician will again make an appeal to principle or religion in opposition to gay marriage. She tells InsideSources: “Doing so dials very poorly with Republicans and Democrats.  When you say, ‘I don’t believe lesbians and gays should be able to marry,’ voters hear that you’re not tolerant, not accepting, old fashioned. Arguing about the way the law was passed is much more palatable to folks on both sides of the aisle. It’s less personal. It implies something about a candidate’s politics, policies, and interpretation of the Constitution.”

As could be expected, Republicans showed strong support for Cruz’s rhetoric. But surprisingly, Democrats also shifted toward agreeing with Cruz as they heard his full argument.

For what has been a heated issue in American politics since it was used divisively by the Bush campaign in 2004, there does seem to be some agreement across the aisle in support of democratic rule on major social change.