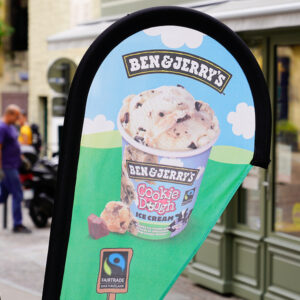 Will States Invoke Anti-BDS Laws Against Ben & Jerry’s for Freezing Out Israel?

The Vermont-based ice cream company known for its progressive politics announced Monday it will stop licensing its products for sale in disputed parts of Israel like East Jerusalem and Israeli settlements in the West Bank.

“We believe it is inconsistent with our values for Ben & Jerry’s ice cream to be sold in the Occupied Palestinian Territory (OPT),” the company said in a statement.

The move gives a boost to the Boycott, Divestment and Sanctions (BDS) movement which celebrated the news. The group Palestine Solidarity Campaign, a major BDS proponent, called it “huge” adding, “The tide of history is turning.”

In response, Israel’s ambassador to the United Nations and the United States, Gilad Erdan, sent letters to the 35 governors whose states have anti-BDS laws urging them to act, “including in relation to your state laws and the commercial dealings between Ben & Jerry’s and your state,” the Associated Press reported.

A Pennsylvania lawmaker is hoping his state will do just that.

There are 35 states with anti-BDS laws on the books and at least one, Pennsylvania, is considering invoking that law in response to the ice cream company’s latest political action.

State Rep. Aaron Kaufer (R-Luzerne) told InsideSources he spoke to the Israeli consulate Monday night and is now calling on state officials to invoke their anti-BDS law. He has sent a letter to Gov. Tom Wolf, Attorney General Josh Shapiro, and state Treasurer Stacy Garrity asking them to enforce the provision that prohibits the state from contracting with companies that boycott Israel.

“Ben & Jerry’s is stoking the flames of antisemitism when they say ‘we’re not going to serve Jewish people in these areas,'” Kaufer said. “And the BDS movement says ‘From the river to the sea.’ In other words, no Jews anywhere in Israel.

“While Ben & Jerry’s surrendered to a continuous and aggressive campaign from extreme anti-Jewish and anti-Israel groups, doesn’t mean we should condone it. We must work together, enforce the law and stand with Israel,” Kaufer said.

Pennsylvania’s law is similar to those in states like Minnesota and Rhode Island. Act 163 states a company contracted by the commonwealth is not permitted to be involved in a boycott, or to refuse “to deal with a person or firm when the action is based on race, color, religion, gender or national affiliation of the person or entity.”

State Treasurer Stacy Garrity, whose office would be part of any enforcement action, told InsideSources she’s willing to do her part. “It is in the interest of the United States and Pennsylvania to stand with Israel by promoting trade and commerce and to discourage policies that disregard that interest. Treasury will continue to thoroughly review every disbursement to ensure that Act 163 is followed.”

Ben & Jerry’s boycott raises the stakes for Israel by extending a BDS action beyond businesses located in the West Bank or Gaza, instead targeting a company located within Israel’s pre-1967 borders. The Ben & Jerry’s ice cream factory is located in the southern part of Israel — ironically an area heavily impacted by Hamas rocket attacks from the Gaza Strip.

It could have been worse. According to a Jerusalem Post report, “Ben & Jerry’s Independent Board of Directors wanted to boycott Israel in its entirety, but was stopped from doing so by the ice-cream maker’s CEO and the British-based parent company Unilever.”

Jewish leaders in Pennsylvania are speaking out.

“This decision of Ben & Jerry’s gives credence to the BDS Movement, which doesn’t recognize Israel’s right to exist,” said Michael Balaban, president and CEO of the Jewish Federation of Greater Philadelphia. “It fails to hold Palestinian leaders accountable for their promotion of hatred, incitement, and terrorism.

“Ben & Jerry’s has branded themselves as a company that has a commitment to social options, combatting social injustice and this action does the complete opposite and hurts the very people they want to help.”