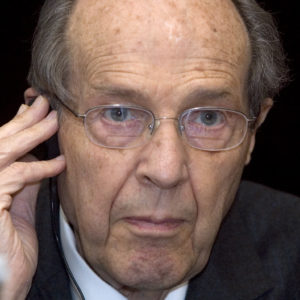 That sounds like descriptions of movie scenes from World War II Britain’s “Darkest Hour.” This time, the scene was a state-of-the-nuclear-age speech by William Perry, former secretary of defense, during the Bill Clinton administration.

Perry spoke all things nuclear — threats, blunders, miscalculations, technology — on the globe since World War II ended and the Cold War began. His view of today’s world is what left a rapt audience spellbound when listening to the former head of the Pentagon. Perry went all biblical in his message, using the analogy of Noah and his carpenters building an ark to survive epic flooding.

“Today, inexplicably to me, we are re-creating the geopolitical hostility of the Cold War and we are rebuilding the nuclear dangers of the Cold War. We are doing this without any serious public discussion or any real understanding of the consequences of these actions.

“We are sleepwalking. We are sleepwalking into a new Cold War, and there’s a very real danger that we will blunder into a nuclear war. And if we are to prevent this catastrophe, the public must understand what is happening. Someone has to … forecast doom so that our carpenters will start to become interested in how to avert the disaster.”

Perry delivered his “doomsday address” before 1,000 riveted spectators recently at the Washington National Cathedral, as part of an event titled “Nuclear Weapons: America, North Korea, Iran & the World at a Crossroad.”

At the conclusion of the two-hour event, the panelists and Perry milled around and mingled with audience members. However, Perry on this night was the star — albeit a dark one.

Perry was surrounded by about 10 of us, eager to ask questions.

I said to him, “Mr. Secretary, your speech was very scary.”

Perry, who is 90 years old, probably about 5-foot-7 and with stooped shoulders, looked up at me and responded, “I meant it to be scary.”

Then, he added, “And if anyone didn’t think it was scary, they weren’t listening right.”

No nuance. Straight, no chaser. A major buzz.

Perry, by trade, is a mathematician and engineer. He earned his bachelor’s and master’s degrees in math from Stanford and his doctorate from Penn State. In 1946-47, Perry was an enlisted serviceman in the U.S. Army, including deployment during the Occupation of Japan, post-World War II. So he knows a little something firsthand about the aftermath when powerful bombs that produce huge mushroom clouds were dropped on Hiroshima and Nagasaki to end World War II in August 1945.

Perry spoke of how a nuclear disaster could occur:

“Today, we are still vulnerable to blundering into a nuclear war if we have a … crisis with Russia comparable to the Cuban Missile Crisis (of 1962).

“I have written that I believe that the likelihood of some sort of a nuclear catastrophe today is actually greater than it was during the Cold War. That’s why I’m sometimes called a prophet of doom and why I find the Noah parable so fitting. Why do I believe that? … Because the United States and Russia are rebuilding their Cold War nuclear arsenals, thus re-creating the military dangers of the Cold War.

“Ultimately, the future of civilization will depend on the judgment of an anonymous watch officer and the judgment and temperament of the American president or the Russian president who have the sole authority to launch a nuclear attack.”

Perry then spoke of nuclear expansion:

“There are two dangers that did not exist during the Cold War. The first of them is a regional nuclear war. Pakistan, India, North Korea today have large numbers of nuclear weapons. Pakistan and India have more than 100 each and North Korea has 20, and building. Beyond that is the danger of a nuclear terrorist attack, which of the nuclear dangers we face today I consider the most likely.”

If you think Perry doesn’t have a sanguine bone in his body when it comes to his death-knell approach, think again. Perry figures he can wake up the complacent in the general population and stir up the decision-makers in the world’s governments.

Perry turned poetic to stamp his imprimatur on his mission:

“I do this because I have promised myself that my eight grandchildren and my three great grandchildren will not have to lead their life as I led mine — with a specter of nuclear extinction hanging over their heads like a dark cloud. And I will do everything I can to keep my promise, or to put it in the words of Robert Frost, ‘The woods are lovely, dark and deep, but I have promises to keep and miles to go before I sleep, and miles to go before I sleep.’’’

With that, Perry (aka Dr. Doom) put the final touch on his case.