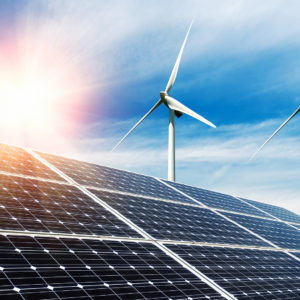 House Republicans passed tax reform last year, but Democrats have set their sights on tweaking things again to help clean energy. Last week Rep. Mike Doyle (D-Pa.), introduced legislation that would create a tax credit for energy storage technologies. His proposal came even as more than 100 Democrats signed a letter to the House Ways and Means Committee asking for a long-term extension of clean energy tax credits, a move that would benefit alternative-fuel vehicles and utility-scale storage.

In the letter, Democrats proposed having the committee revisit more than 40 provisions in the tax code that award subsidies to conventional energy. They noted that Congress has not addressed ways of supporting clean energy in a decade and pushed for an extension of tax credits that otherwise expired.

“With these latest climate reports in mind as well as our shared interest in developing a thoughtful, comprehensive infrastructure package to support economic growth and address some of the most pressing challenges facing the country, we ask that the Ways and Means Committee not miss the opportunity to support the development of clean energy technologies,” the letter stated.

Green energy groups came out in favor of the letter, which they say would help both the environment and the economy.

“As the signatories note, providing long-term certainty for clean energy tax incentives would allow the U.S. to achieve its carbon reduction goals while dramatically boosting clean energy jobs, U.S. investment in electric generation and our global position as a renewable energy leader,” said Gregory Wetstone, President and CEO of the American Council on Renewable Energy (ACORE), in a statement.

“Clarifying the tax code for energy storage technologies is also a critical piece of the puzzle that would have technology-neutral benefits,” he stressed.

The letter was also praised by groups representing the wind and solar power industries, both of which would benefit from the proposed clean energy tax incentives.

The Solar Energy Industries Association (SEIA), the largest solar industry organization in the country,  said that it was “pleased” by the strong support for clean energy priorities.

“In the solar industry with our nearly 250,000 employees, we know how strategic federal tax policy has led to the creation of hundreds of thousands of jobs and hundreds of billions of dollars in private investment to grow the economy,” said Vice President of congressional affairs Erin Duncan, adding that the solar industry knows that “tax incentives work.”

Meanwhile, the American Wind Energy Association (AWEA) explained that energy storage was a “catalyst technology” that would help to improve affordability and reliability for the entire electricity supply.

Remaining silent on the matter are conventional energy companies and manufacturers, which so far have not commented on the proposal.

In conjunction with the letter, Pennsylvania Rep. Mike Doyle (D) introduced legislation to create a tax credit for energy storage technologies. Currently, energy storage only qualifies for subsidies if it is paired with a solar energy project, but green energy proponents stress that it is needed for other types of renewables as well.

Democrats have continued to return to the need for green energy subsidies, even as the Trump administration works to scale them back. In January, during the government shutdown, Senate Minority Leader Chuck Schumer asked for permanent tax incentives to support clean electricity and storage, energy efficient homes and commercial buildings, electric vehicles, and modernizing the electric grid. Those incentives were not included in the final compromise spending bill.

Now Congress is set to debate the matter again. The tax credits have support from House Democrats, but will likely face stiff resistance from Republicans and the Senate.