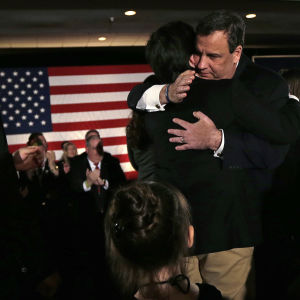 Christie Quits, and 2016 Loses Its Most Affecting Political Storyteller

New Jersey Gov. Chris Christie dropped out of the Republican presidential race Wednesday. After dealing a devastating blow to Florida Sen. Marco Rubio in Saturday’s debate, the governor earned just 7 percent of the vote in Tuesday’s New Hampshire primary. He finished 3 percentage points ahead of former Hewlett-Packard CEO Carly Fiorina, who ended her campaign as well.

It remains to be seen which of Christie’s rivals benefit from his departure — or if he’ll endorse one of them. But the presidential campaign has clearly lost its most affecting political storyteller, a man who’s taught a master class in the power of emotional anecdotes since becoming the Garden State’s governor in 2010.

Here are three examples of the governor at his most captivating, regaling audiences at town hall meetings. Look closely. There are even a few people wiping away tears.

On fighting drug addiction: “I’m pro-life for the whole life.”

On trust and candor: “There’s nothing left unsaid between us.”

On what voters should imagine as they enter the voting booth: