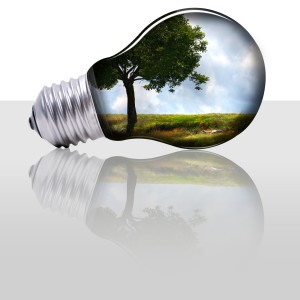 With the Growth of Energy Saving Appliances, Why Aren’t Electric Bills Lower?

For American homeowners, utility bills seem like an inversion of the line from Dazed and Confused: the houses keep getting newer, but the bills stay the same. In 2016, according to government statistics, the average household paid $112 each month for electricity, which means that they used an average of 897 kWh per month. Southern states generally used more power and more temperate Pacific states less. For 25 years, the U.S. government has promoted energy efficiency through programs like Energy Star, a program to provide consumers with unbiased information about how to make their homes more energy efficient. How much has it really helped, though? In 2009, the average household used 936 kWh per month and paid $99.70. Since then, usage has remained relatively consistent while prices have increased. America’s investment in energy saving appliances and lighting has not been enough to offset the growth of personal electronics.

These devices are merely the most obvious signs of the digital age. Seven in ten households have Wifi internet. The days of connecting a single device to the internet with an ethernet cable are waning. This connectivity, like the growth of mobile devices, comes with significant energy costs.

Keeping a wireless router plugged in and consistently turned on uses 52.56 kWh per year, which would cost the average American about $6. That’s only the tip of the digital iceberg. A desktop computer monitor left turned on for most of the day would use around 260 kWh over the course of the same year. To put it into perspective, that’s more than a third of the electricity the average refrigerator uses in the same period.

A smart tv has a similar effect. Even when nominally “turned off” it must be connected to the internet, which cancels out some of the power savings. Keeping it in a quick start mode draws additional electricity. A first generation Apple TV, for example, still draws 17W each hour when it is turned off. That’s three times as much as an energy efficient washing machine that is turned on, but not running.

On their own, none of these gadgets make noticeable impacts on your electric bill. Keeping a smart tv on standby mode might only cost a few dollars more over the course of a year. However, the rapid increase in the popularity of these devices means that the small additions add up. It’s not just the television, but also the Apple TV, the DVR, the cable box, the wireless remote, the wireless router, and the rechargeable speaker.

“Over a longer time horizon there will also be entirely new electricity-using services that come available, including services that are not yet even imagined. The 10-fold increase in electricity consumption since 1950 reflects, to a large degree, that U.S. households now use electricity for many more things than they did in the past,” writes Lucas Davis of the Energy Institute at Haas at the University of California Berkley.

Some would say this future is already here. Certain Americans aren’t just better connected. They’re charging more devices and all these batteries add up. The International Energy Agency predicted in 2009 that energy use for computers and other electronics would double by 2022 and triple by 2030. They noted that while no individual device uses much electricity, the aggregate effect of millions of new computers, phones, and televisions is large.

These new devices come as lighting and appliances, traditionally two of the largest draws of household electricity, are becoming more efficient. In the last decade, the use of LED lights in the U.S. has soared from fewer than half a million in 2009 to more than 450 million in 2016. Since lighting traditionally has used about 15 percent of total household power, this is an significant decrease. Paired with increased energy efficiency in heating and cooling sectors, many specialists were encouraged to think that longstanding growth trends in energy usage had been halted and a more climate friendly future was at hand.

The difference is that while appliances and lighting are becoming more energy efficient, so far there has been less pressure on device manufacturers. Technology companies are working to make devices charge faster and to have better battery life. So far, however, they have not had the same incentives to make tablets, phones, computers, and other devices energy efficient.

Even with the growth of consumer electronics, the bulk of today’s electricity use remains heating and cooling, appliances, and lighting. Together, these account for just under half of the electricity use of the average house and as such are the focus for many energy efficiency programs. As energy use declines, though, the efficiency focus may shift to other household sectors.