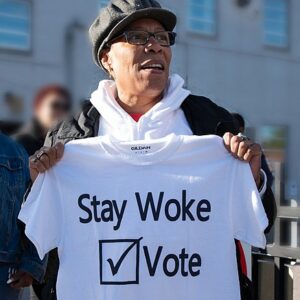 Then–Congresswoman Marcia Fudge with a T-shirt reading "Stay Woke: Vote" in 2018
[IS] Opinions

Perhaps James Carville and Bill Maher are on to something.

The fiery Carville, a Democrat strategist, said on PBS that “stupid wokeness” is costing the party, such as Terry McAuliffe in the hotly contested Virginia governor’s race.

The calculating Maher, host of “Real Time” on HBO, said after election night that parents want a say in their children’s schools. He targeted the controversial critical race theory (CRT).

Vanderbilt race and religion professor Michael Eric Dyson, who is Black, said on Maher’s show that parents were “spooked” by CRT because Black history is now at the focal point of schools.

Maher said that argument is “disingenuous,” adding that parents aren’t objecting to Black history being taught, but rather “to other concerns” such as “separating children by race.”

“And describing them as either ‘oppressed’ or ‘oppressor,'” he continued. “I mean, there are children coming home who feel traumatized by this. That’s what parents are objecting to.”

McAuliffe remarked during a September debate, “I don’t think parents should be telling schools what they should teach.”

Many liberal pundits tried to accuse Youngkin of being a racist, similar to Donald Trump. Some in the media tried to paint him in the cloak of white supremacy, but in reality, many voters were tired of being ignored, feeling they didn’t have skin in their children’s education.

Furthermore, if white supremacy is so strong in Virginia, how did Winsome Sears — a Black woman — win the state’s lieutenant governor race?

Winsome is already the subject of attacks from the left, calling her “a Black mouth moving but a White idea running on the runway of the tongue of a figure who justifies and legitimates the white supremacist practices.” But then again, that’s all many liberals know how to do: Call their foes “white nationalists” or “white supremacists.”

Voters saw Youngkin as someone trying to empower parents. He capitalized on a hot-button issue; in 2022, Republicans may target migrants at the border, in 2024 they could target history/statues.

Bring the power back to American homes, the kitchen table.

As Carville said, “Look at Long Island, look at Buffalo, look at Minneapolis. Even look at Seattle, Wash. I mean, this ‘defund the police’ lunacy, this ‘take Abraham Lincoln’s name off of schools’ — people see that.”

Carville said such policies have a “suppressive effect” across the country, and he suggested that progressive Democrats “need to go to a woke detox center.”

On Maher’s show, Dyson continued to argue the debate in school districts was solely focused on how Black history is taught to children rather than the CRT ideology itself.

“But that’s not all we’re talking about,” Maher pushed back. “We’re talking about kids who seem to be too young sometimes to fully appreciate all this. I think if kids watched you, they wouldn’t know a lot of those words. So to ask them as opposed to letting kids be kids, maybe, where usually kids are pretty nice to each other (unless) they’re instructed not to be.”

Glenn Loury, a Black economics professor at Brown University, told Maher “we need to be getting beyond race,” saying “we’re in the 21st century, not the 19th century” and that young people shouldn’t be “put into boxes” but allowed to do “what comes naturally, which is cross the lines.”

But there is “The Squad,” that band of six members of Congress pushing hard for their ultra-progessive agenda. Cori Bush, congresswoman from Missouri, still leads the “defund the police” chatter that Carville abhors.

And as for CRT, Boston University professor of history and Africana studies Ibram X. Kendi is one of its founders. He wrote the book on “How to Be An Antiracist.”

Well, many of the much-publicized, unprovoked racial attacks against Asian Americans have been perpetrated by Black folk, especially in the Bay Area and New York.

The punches, the kicks, the slaps.

What about Black racism?

If not, then why?

“The only way to undo racism is to consistently identify and describe it — and then dismantle it,” writes Kendi. But what about the racial separation antiracism causes and the “oppressor” vs. the “victim” categories everyone is lumped into. Which Maher obviously grapples with, especially when pertaining to young children.

After all, wokeness and CRT have proven costly to Democrats this election season.