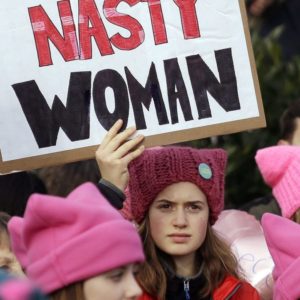 Just three years after its conception, the Women’s March is making more headlines for dividing women than uniting them.

On Saturday, the 2019 Women’s March is descending on the capital, with smaller marches scheduled for cities around the country. Two years after President Trump’s inauguration, however, the divisions in the movement are starting to show–the event, which included more than 560 progressive organizations as partners in 2017, now lists just 200. One major reason for the protest’s decreased support is it hardline pro-abortion stance.

Starting with the first march in 2017, protest organizers have worked to exclude pro-life women’s groups. Pro-life feminist organizations including New Wave Feminists, And Then There Were None, and Students for Life for America discovered that their names had been removed from the list of partners after an article in the Atlantic highlighted their participation.

Women’s March organizers quickly moved to amend their statement of principles to include full-throated support of abortion rights.

“We do not accept any federal, state or local rollbacks, cuts or restrictions on our ability to access quality reproductive healthcare services, birth control, HIV/AIDS care and prevention, or medically accurate sexuality education,” the Women’s March states bluntly in its lengthy statement of principles.

This year, Planned Parenthood continues to be a proud partner of the protest. In a Medium post this week, Angela Ferrell-Zabala, the national director of strategic partnerships at the Planned Parenthood Action Fund said that the group was, “once again proudly joining our numerous progressive partners for the #WomensWave mobilization to protect and advance the progress we’ve made as a movement.”

For the organizers of the march, it is not enough just that abortion be legal. It must also be widely available and government-subsidized: “We understand that we can only have reproductive justice when reproductive health care is accessible to all people regardless of income, location or education.”

These statements put the Women’s March far to the left of where most Americans–and most women– stand on the issue of abortion. According to a poll released this week by Maris and the Knights of Columbus, Americans are overall in favor of increased restrictions on the availability of abortions. According to the poll, a full 60 percent of Democrats, 92 percent of Republicans, and 72 percent of independents support limiting abortions to cases of rape or incest or where pregnancy would harm the life of the mother. And an overwhelming majority of American women support some restrictions on late-term abortions.

Perhaps reflecting this divide, sister marches across the country have been struggling to attract the donations and attendance they need to pull off events of their own. Already, several cities including New Orleans, Chicago, and Eureka, Cal. have cancelled their marches, both out of concern over the anti-Semitic statements and because of a lack of community support.

Just three years after the Women’s March was founded as an inclusive protest group, it appears to have morphed into an explicitly leftist one. The March did not respond to a request for comment on the shift.

This year, with both the March for Life and the Women’s March taking place on the same weekend, the issue of abortion will be front and center in Washington. For the Women’s March, there is little room for compromise. Unfortunately, it seems that the American people don’t necessarily see things the same way.