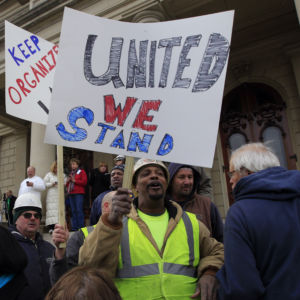 Worker centers have become an increasingly influential force within the labor movement with their ability to function in ways that traditional unions legally cannot, according to a report Wednesday.

Worker centers are activist organizations that fight to promote work-related laws and organize workers that aren’t represented by a traditional union. They are primarily funded by political foundations. They are unique in that they are not restrained by federal laws that limit union activities – sometimes helping unions recruit members in ways they are unable to do.

The Workforce Freedom Initiative, a division of the U.S. Chamber of Commerce, looked at the emerging role of worker centers over the past four years in its report – particularly in regards to how they have supported union organizing. The report also highlights how unions, political foundations, and other advocacy groups have funded these organizations.

“Arguably, they appeal to their members in part because these centers are able to connect with them in ways that unions cannot, and in part because, operating beyond the boundaries of established labor laws, they have more degrees of freedom in the types of activities they undertake than are available to their more traditional counterparts,” the report states.

The report also serves as an update to an earlier analysis which was originally published in 2013. Both reports determined that worker centers essentially function as hybrid organizations with some attributes of traditional unions –  particularly in how they organize and sometimes recruit workers.

Worker centers are different than traditional unions in that they typically do not engage in negotiating contracts. The new report, however, did find that there have been more attempts to deal with employers regarding the terms and conditions of employment since 2013.

The report also breaks down funding for worker centers based on direct and indirect support, and whether that funding came from a labor union or political foundation. Foundations account for the 10 largest worker center donors. The Ford Foundation, for example, was found to be the biggest donor. It contributed $44,003,000 to worker centers and related entities between 2013 and 2016.

Jobs with Justice (JWJ) plays a key role in how unions have interacted with the worker center movement. JWJ was founded by leaders within the labor movement in 1987 and has since helped to mobilize support for union organizing and worker justice campaigns. It has directly supported and founded several worker centers across the country which carry out its political objectives on the local level.

The JWJ receives funding from both labor unions and political foundations.  The Service Employees International Union (SEIU), for example, contributed $3.1 million to the group between 2013 and 2016. Additionally, the Communications Workers of America contributed $824,000 over that same time.

The SEIU is perhaps one of the most influential unions when it comes to the worker center movement. The report highlights eight worker centers the union founded – most of which operate as organizing committees for the union. The Fast Food Workers Committee is its largest worker center, receiving $14 million from the union between 2013 and 2016.

The report concludes that worker centers are generally looking more like traditional unions in how they are defined under federal labor law. At the same time, they are unlikely to become unions given the legal restrictions that would then be imposed on them – like limits to picketing.

“Worker centers can go where unions cannot, whether demographically, culturally or politically, or perhaps even with regard to engaging in things like secondary activity or unlimited picketing,” the report states. “Once institutionalized they would almost inevitably lose their flexibility and, one suspects, even risk their appeal.”

The report adds that this dynamic has created a unique relationship between traditional unions and worker centers. While unions have benefited from worker centers, they remain at an arm’s length from the greater movement. At the same time, unions have used the model to help organize and recruit workers, even forming their own worker centers like in the case of the SEIU.