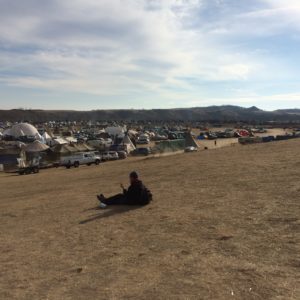 Mandan, N.D. — This fall, Dakota Access Pipeline protesters at the Sacred Stones Camp in North Dakota proudly highlighted the Defenders of the Water School as a camp success story. By October, they had changed their tune. In a letter addressed to tribal chairman Dave Archambault II, the North Dakota State Superintendent of Public Instruction Kirsten Baesler informed the group that the makeshift school did not meet the standards of the state of North Dakota.

She requested that students attend schools in the nearest district, then Mandan, until the school completes the state’s approval process. Now, a month later, the issue has stalled, leaving the educational status of the children in the camp uncertain.

This is a concern for Baesler, who says that since sending the letter, she and her office have received no response from Chairman Archambault. This leaves her in the dark as to not only how the children in the camp are being educated, but even how many of them there are. She says that she understands there are between 40 and 60 children of school age in the camp, but it is difficult to get a fixed number given the fluid nature of the protest.

For Baesler, who considers education equity to be an important goal, the situation is troubling.

“Experiential learning is encouraged, but still there are certain standards of what children should be able to accomplish at different ages,” she says. The longer that children are out of school, the more difficult it will be for them to catch up with their peers later.

This is part of why North Dakota has rules governing both truancy and home education.

These regulations state that students are required to attend school between the ages of 7 and 16. The same attendance requirements apply both to schools on and off of reservations. In addition, state law requires that public, private, and home schools operate with state approval. (It was this requirement which the camp’s de facto school flaunted this summer.)

“There are options,” says Baesler. “The state is asking parents to take advantage of these approved schools.”

After receiving the letter, some protesters shifted from calling Defenders of the Water a school to referring to it as a “homeschool resource center.” However, the state’s homeschool association says they have yet to be contacted by any parents at the camp and they are concerned that the protesters will tarnish homeschooling’s reputation as a serious education option.

“I did contact the superintendent of Public Instruction [to] express my concern that this was being called a homeschool,” says Theresa Deckert of the North Dakota Home Schooling Association.

“Homeschooling by North Dakota law means the parents pay for and do the instruction.”

(This differs from the “school” in the camp, where volunteers, rather than parents teach de facto classes on a variety of subjects.)

Baesler agreed with the association’s concerns and characterized her efforts as an attempt to maintain the integrity of home education. North Dakota law is quite friendly to parents who opt to teach their children at home. Under the law, parents who wish to homeschool their children must themselves have a high school diploma and must maintain records to show the coursework their child has completed over the course of the year. Furthermore, the state requires that students in grades 4, 6, 8, and 10 must take a state standardized achievement test in order to flag any potential areas where a student may need additional help.

The situation is troubling to Baesler who has worked throughout her term as superintendent to maintain strong relationships with North Dakota’s various tribes.

“Respect is very important to our tribes,” says Baesler. This means that as the head of education in the state, she meets often with tribal councils or their representatives. About 8 percent of North Dakota students attend reservation schools.

While Baesler’s focus is on educating the children, the local sheriff’s department has been concerned about their safety as well, citing concerns about the coming winter temperatures and the presence at the camp of protesters with histories of domestic and child abuse. The camp has also been the launching point of violent attacks against the police.

At present, Baesler is working to set up meetings with education officials at the Standing Rock tribe, hoping to work towards a solution that will ensure that children at the protest are receiving an education.

“I hope that we are able to move past this, more informed, better prepared to resolve further issues and situations that occur as we grow,” Baesler said. “[Our children] are our future leaders. They are our leaders.”