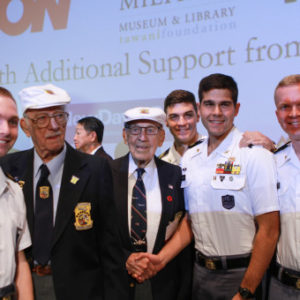 Nineteen years ago, the American Veterans Center began hosting an annual conference to honor World War Two veterans. At the time, the event was small and quiet, attended by just a handful of people. Then the focus was on remembering past conflicts. Time and events, though, started to shift the event’s focus. As the wars in Afghanistan and Iraq continued, veterans’ needs shifted. Increasingly, soldiers were surviving the sorts of wounds which had killed men in previous wars. Thanks to modern medical treatment, these soldiers had survived, but faced long, grueling recoveries. From honoring soldiers of past wars, the conference shifted to also support those who fought in current wars.

And so, in 2009, the Wounded Warrior Experience was born. This week, the event continues for its seventh year, assembling an historic array of speakers and honorees.

The three-day event, which attracts hundreds of people and threatens to outgrow its space at the United States Navy Memorial, bills itself as “a once-in-a-lifetime chance to spend a weekend in the company of heroes.” This is not hyperbole, but rather a conscious focus of the event.

Jim Roberts, president of the American Veterans Center, explains that the group focuses on students and young officers when putting together the event.

“Hearing these stories [from veterans] gives them a crash course in leadership, ethics, and military history,” he explains, adding that these subjects were often given only a cursory treatment, even at the military academies.

The value of these talks is demonstrated by the warm reception they receive. Many of the students attending are cadets whom Roberts describes as the “cream of the crop,” generally seniors with strong records in their respective schools.

Not only are students attending, but the talks have a strong impact on them. Roberts says that he receives letters and emails from them after the conference each year, expressing their gratitude for the experience of hearing these stories of valor and telling Roberts that they had never had the opportunity for a lesson such as this. It’s a blend of history, ethics, and courage, told by the soldiers who experienced events firsthand.

This year the heroes include Richard “Dick” Cole, the last surviving member of the daring Doolittle Raid over Japan in 1942. Cole, now 101 years old, was Doolittle’s copilot. Roberts describes him as “a piece of walking history.”

But history is not limited to events seventy years in the past. This conference will also include Scott Smiley, the Army’s first blind active-duty officer. Smiley shows that for some, service and sacrifice are traits that continue despite, and in the face of, adversity. After a roadside bomb in Mosul, Iraq blinded him in 2005, Smiley worked through months of recovery before resisting medical discharge and convincing the military to allow him to return to active-duty.

For Smiley and many of the other panelists set to speak at the Wounded Warrior Experience, such dedication was something expected. Their qualities of self-sacrifice and discipline are important traits both in military and civilian life.

“These stories are a valuable way to communicate leadership traits to a younger generation of leaders,” says Roberts, who hopes that those who listen will be led to become better citizens prepared to serve their country and to have an impact in both civilian society and the military.

By listening to and preserving these stories, and also through awards honoring members of the military past and present, the Wounded Warrior Experience hopes to remind Americans again and again of the virtues of fortitude, courage, and sacrifice which have preserved the United States through decades of conflict.

As President Reagan once said, “Freedom is never more than one generation away from extinction….It must be fought for, protected, and handed on for them to do the same, or one day we will spend our sunset years telling our children and our children’s children what it was once like in the United States where men were free.”