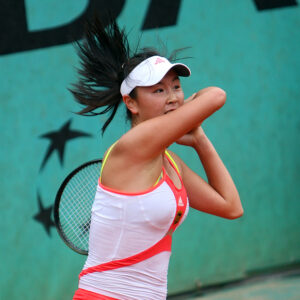 WTA Stands Up When the NBA Won’t

“(The) IOC buckles under just the thought of losing business in China,” Christine Brennan, USA Today sports columnist, told CNN. “The NBA buckled under the pressure. And here’s the WTA saying enough is enough. Standing up, doing what’s right.”

The background: Tennis star Peng Shuai disappeared from public view for about three weeks after accusing China’s 75-year-old former vice-premier Zhang Gaoli of rape in an incident that allegedly occurred three years ago at his home. The 35-year-old Peng’s post on Chinese social media was a 1,600-word treatise on Nov. 2 detailing her uncomfortable relationship with Gaoli. (Or perhaps a cry for help.)

The post stayed 10 minutes before it was scrubbed by Chinese censors.

Note that Communist China isn’t exactly a fan of the #MeToo Movement — or individual rights.

Then, non-time stamped photos and video of Peng resurfaced on Nov. 21. But her supporters and the WTA declared that wasn’t enough.

That’s when Steve Simon, chairman and CEO of the WTA, made this bold statement. “We have to start as a world making decisions that are based upon right and wrong, period. And we can’t compromise that. And we’re definitely willing to pull our business and deal with all the complications that come with it because this is certainly, this is bigger than the business.”

Tennis in China is a billion-dollar business for the WTA. Ten tournaments there reportedly comprise one-third of its revenue. Highly lucrative and prestigious for China.

Now, it’s all on the line for the WTA.

Where is Peng Shuai?

Furthermore, where is the NBA, the “wokest” league in pro sports?

The NBA has formed a lucrative business relationship with China after hosting preseason games there since 2006. USA TODAY Sports recently estimated the NBA makes about $500 million a year with this partnership, which ranges from merchandise sales and television rights. And there are 500 million TV viewers.

In October 2019, then-Houston Rockets general manager Daryl Morey was chastised by some in the NBA for Tweeting his support for Hong Kong protesters fighting Chinese oppression. China, of course, didn’t like Morey’s move.

“I don’t want to get in a word or sentence feud with Daryl Morey. But I believe he wasn’t educated on the situation at hand,” James said in believing that Morey misgauged China’s harsh reaction to his Tweet.

Isn’t it peculiar how NBA players and coaches love to speak incessantly about oppression in the United States, but not China?

But, when it comes to China: Hush.

During the Morey incident, various Chinese companies announced they would end partnerships with various NBA stars.

Where are the iconic NBA guys, who simply need one name for identification — from LeBron to Steph to Dame to Giannis.

Now, the state of NBA-China affairs seem back to normal, meaning that uneasy alliance.

NBA players wouldn’t dare stop the all-important Money Dance and voice support for Peng Shuai — unless you are Enes Kanter.

Kanter, a Boston Celtics player from Turkey, has been poking at the bear (that means LeBron). He’s shown his intense displeasure with LeBron — and at times Michael Jordan for his shoe deals in China — with cryptic messages about him written on his game shoes.

And he speaks of how the WTA grew a spine and the IOC, NBA, NBC, Apple, and Nike did not.

Kanter, who faces arrest in his home country for criticizing Turkish President Tayyip Erdogan, recently wrote an opinion article for The Wall Street Journal calling for the Winter Olympics to be moved out of China.

Kanter told CNN the day before Thanksgiving, “I believe not just the NBA should speak out, but the NFL, NHL, MLS, MLB, or every organization should take notes of what the WTA did. It was unbelievable how they stand behind their players, like Peng Shuai, and they just said it: We do not care about your endorsement deals. We do not care about your business or money. We stand with our players.”

Now, the question put forth by the WTA and United Nations is Peng may have reappeared on video, but is she truly safe. And will Olympic sponsors pull out of the Winter Games in February to force China’s hand.