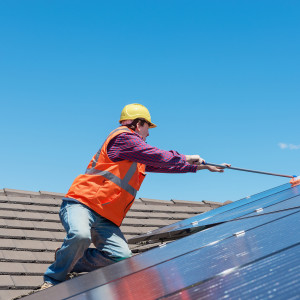 Your Roof May Be the Next Big Thing to Be Uberized

That is the dream of a group of hugely successful entrepreneurs who see roofs as the next big monetization of a widely held capital asset.

This group, which at present chooses to remain anonymous, believes that with the right communications network and smart computer linkage, the nation’s sun-trapping roofs could become a new source of electricity; and, if connected to in-home batteries, a virtual power plant of scale and reliability.

What Uber did for ride-sharing and what Airbnb did for lodging, these entrepreneurs believe could be done for the electric utility industry.

One of them told me, “A network can be many different things, but in the context of a network of potentially millions of solar rooftops, it means virtually real-time capture and analysis of billions of data points. Only a wireless network, using the latest broadband technologies — similar to those that support our smartphones — can handle that workload.”

Rewind the clock to when solar cells became generally available: Utilities encouraged their use and bought electricity from customers when it was generated, not when it was needed.

At the same time, large solar plants began to be developed and owned by the utilities, which worked better for them, and they soured on rooftop solar.

In talking to utilities, I find them to be cool-to-indifferent to rooftop solar but enthusiastic about solar central station generation, particularly if linked with battery storage. Mostly, utilities like solar generation because of its predictability.

The idea of hooking together a vast network of millions of solar panels on roofs with their own batteries puts demand back in the hands of the utilities, giving them the flexibility of having a great new resource.

Also, like the Uber model, there would be variable pricing: In a crisis or a high-demand situation, the utility or the system operator would order power from homeowner batteries at surge prices, befitting all. Owners of solar rooftop and battery setups would become “citizen solarizers.”

The concept of a vast, on-demand, virtual power plant isn’t entirely speculative. Brian Keane, president of SmartPower, told me that what might be a frontrunner is already being tested in Connecticut.

“All residential customers who choose the ‘Connecticut Green Bank’s CT Storage Solution’ option receive the generous, upfront rebate incentives for agreeing to have their battery drawn from every weekday afternoon during June, July and August, as well as on high-need ‘critical’ days on the weekends, in September, and for a handful of days during the winter months. Customers will get a payment each year based on the amount of electricity that is drawn from the battery,” Keane explained.

Developing a national virtual power system would enhance something that is happening quietly, which is what I call the “buttressing of the grid.”

It might be seen as the tacit acceptance that the grid isn’t going to be rebuilt in any substantial way, but it will be buttressed by new generation and limited new transmission. Uberizing rooftop solar could be an important part of this buttressing — and a gift to the nation both as a source of clean power and citizen involvement.

It remains to be seen whether regional solar networks would be subject to regulation by the federal government or by the states.

Going forward, a rooftop solar installation might be more than a convenience for a household and a way of signaling green virtue.