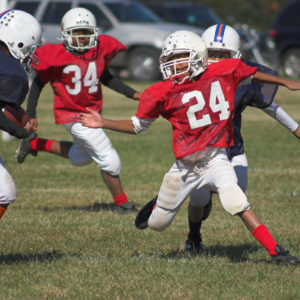 Is football too dangerous for kids to play? In a sport with inherent injury risk, this is a difficult question to answer. Risk of injury, including brain trauma, cannot be eliminated, but it can be reduced to an acceptable level for many. Furthermore, playing football should not be decided solely on the basis of accepting more or less risk, but rather as the balance between the risk and reward of participating.

As a former football player who has experienced football’s risk and reward firsthand, and now as a scientist who studies brain injury risk in youth football, I believe that appropriate steps are being taken by youth football organizations to make the game safer than it has ever been.

A major focus for youth football organizations has been educating coaches about concussions and teaching blocking and tackling techniques intended to reduce head impacts. USA Football’s Heads Up Football education program is required training for many coaches. With this education, coaches become more aware of concussions and learn how to recognize and prevent injuries.

Many state laws and league rules require that injured players be removed from play and are not allowed to return until cleared by a qualified health care provider. These efforts are greatly bolstered when youth leagues provide athletic trainers for their games.

Medical care for concussions has improved dramatically over the last decade, helping to ensure that players recover properly before returning to action. Several youth organizations have adopted rules that limit the amount of hitting in practice and forbid the use of certain drills that create unnecessary head contact.

Moreover, two-a-day practices are becoming a thing of the past at all levels of play and some leagues have enacted rule changes, such as eliminating kickoffs, to reduce open field hits. Nationwide, flag football has become more prevalent as an alternative or introductory pathway to the sport. Yes, some organizations fall short, but we should never use the worst example as the example. There is always room for improvement; however, we are headed in the right direction.

Most youth coaches played football and were positively influenced by the game. They often volunteer countless hours, while undergoing increasing scrutiny, so their players may have the same or an even better experience than they had. Many of these coaches are positive male role models who instill life lessons that extend well beyond the playing field.

I sincerely believe that nearly all have the best interests of their players in mind and have shown a willingness to change with the times. They deserve respect and support, not criticism, for their efforts.

Finally, I will address some misunderstandings that often enter this emotionally charged debate. First, no study has identified the prevalence of chronic traumatic encephalopathy or other brain disease among all NFL players, much less among all football players in general — the vast majority of whom (98 percent) never play beyond high school.

Furthermore, most experts believe that the risk of football-related brain damage is exposure-related, meaning that the greater the exposure to repetitive head impacts, the greater the risk. If that paradigm is correct, it must also follow that the risk of brain damage is considerably lower among individuals who play football only at the youth or high school level, as there is a well-established, significant increase in cumulative head impact exposure at older levels of play.

Thus, generalizing injury risk from NFL players to youth players is simply inappropriate. To proclaim that all football players have or will get brain damage is irresponsible for those who don’t know the science and dishonest for those who do, because there is no current, scientific evidence to support those assertions.

Claiming the moral high ground on this issue does not justify creating or spreading false information.

We learn about our world in two ways — through science and our own experience. When the science is unclear or incomplete, our experience guides us. Look at the people you know who played football and ask yourself — do you see an epidemic of brain injury? I think for the vast majority of people the answer is clear. My experience tells me that most former football players live normal, productive lives, and would happily do it all over again.

In conclusion, I believe youth football is safer than it has ever been, and getting better each year. Let’s educate people, not scare them. In the process, we will give families and young players the opportunity to experience the tremendous rewards football has to offer.