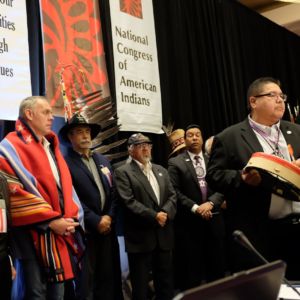 Interior Secretary Ryan Zinke after being given a ceremonial blanket at the NCAI conference. Credit: Interior Department
News

Most years, the annual conference of the National Congress of American Indians (NCAI) is a minor event, attended by tribal and government officials. This year, however, it’s suddenly a tense occasion. Tribal representatives are meeting in Connecticut to discuss a broad range of concerns on reservations around the country. First on their lists is relations with the new Trump administration, which many believe has been unclear as to its policy goals with respect to tribes.

On Monday, during a pair of listening sessions hosted the day before the conference officially began, tribal representatives harshly criticized the Department of Interior for moving forward with a reorganization plan without first consulting with the tribes affected. The new Secretary of the Interior, Ryan Zinke, had yet to speak to the NCAI and members were willing to give him the benefit of the doubt, but they warned that they may change their minds if they perceive the department as unresponsive to their complaints.

In his remarks, Zinke emphasized his commitment to tribal sovereignty and stressed his belief that more decisions should be left at the local level.

“Tribal sovereignty should mean something,” said Zinke, “and the Trump Administration fully supports and respects the government to government relationship we have with Native American Tribes and Alaska Natives. As Secretary, I am committed to giving more latitude and decision-making power to the front lines, which includes our tribal communities.”

Admitting that the current system was broken, he promised to work with the tribes to fix it and stressed his commitment to tribal sovereignty, equal partnership between tribes and DOI based on respect, and the need for improvements to the Bureau of Indian Affairs and the Bureau of Indian Education.

After his speech, Zinke met with tribal leaders and members of the NCAI Youth Commission, before continuing on to an event in New Hampshire.

Although Zinke has reiterated his commitment to tribal authority, it is still uncertain if this will be enough to reassure tribal leaders, who have been unsure of what to expect from the new administration.

Tensions were exacerbated by Zinke’s interim report on the Bears Ears National Monument, which he submitted to the president on Monday. In a statement released at the time, Zinke acknowledged that the area “merits some degree of protection,” but said that a monument of almost 1.5 million acres was not “the best use of the land.” Although Zinke extended the comment period through July 10, area tribes are concerned that the administration will strip protection from the site, which they regard as sacred.

Most recent Interior Secretaries have addressed the NCAI conference, although Bureau of Indian Affairs and Interior Department officials did unofficially boycott NCAI events in 2003 after friction between the NCAI and Bush administration officials.

As secretary, Zinke has made cooperation with tribal governments a primary focus, even as he works to support the Trump administration’s push for increased domestic energy development. However, tribal representatives are worried about Trump’s March 13th executive order calling for a reorganization of the executive branch. They fear that reorganization could mean cuts for the BIA.

In part, their fears reflect a remembrance of things past. The Bush administration briefly floated a proposal to split the BIA in order to separate its resource management functions from its tribal liaison operations. This proposal was strongly rejected by the tribes.

Going into the conference, however, the biggest problem the tribes had with the new administration is a simple lack of information. Without knowing how the BIA might be affected by restructuring, the tribes can’t formulate a list of concerns.