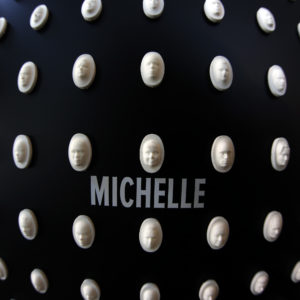 This is a portion of an art installation called "Prescribed to Death Memorial." The installation features 22,000 carved medicine pills that represent the face of someone who fatally overdosed in 2015. (AP Photo/Gene J. Puskar)
News

How a Memorial Shows the Tragic Loss From the Opioid Crisis

Opioid abuse in the U.S. is never far from headlines. The numbers of overdose deaths and hospitalization are lowering the life expectancy of white men and leaving some Ohio communities with death tolls higher than they experienced during the Second World War. Unlike previous drug use epidemics, opioids are affecting communities across the country. Given the sheer size of the problem, it can be difficult not to lose the humanity of it, to see the numbers rather than the faces. Bringing back the human side of the tragedy is the focus of Prescribed to Death, a memorial unveiled by the National Safety Council (NSC) in Washington, D.C. on Wednesday, in an event that also featured Secretary of the Interior Ryan Zinke and Health and Human Services Secretary Alex Azar.

“Opioids have decimated communities across this country. This is not a federal or a state issue. It is not a red state or a blue state issue. This is a human crisis,” said NSC President and CEO Deborah A.P. Hersman, who went on to call opioid abuse “the greatest public health crisis of our time.”

The memorial shows the likenesses of people who died from opioid addiction carved into individual pills. The rows of tiny white faces emphasize the sheer scope of the overdose problem, one which words like crisis and epidemic struggle to contain.

The NSC is an organization of more than 55,000 businesses, labor organizations, public and private groups, and schools working to decrease preventable injuries and deaths. Presently, with 75 percent of those affected by opioids participating in the workforce, substance abuse is something that many employers must deal with. Substance abuse causes problems for employers in terms of hiring, absenteeism, and safety on the job.

Hersman stood in front of the memorial to push elected officials to adopt policies to reduce the prescription of opioids through electronic prescription drug monitoring programs, the expansion of access to naloxone and medication-assisted treatment, and education for doctors and patients about the addiction risk of opioids.

“With this memorial we are putting a face on the opioid epidemic, we want to educate and empower the public. Despite the national headlines on this issue, we find that one third of opioid users do not realize that their medication is an opioid drug. People assume that it is safe if their doctor perscribes it,” said Hersman.

Thus far, the NSC has found a willing partner in the present administration. President Donald Trump has made combating the crisis a key focus of his first term, tasking every one of his cabinet secretaries with dealing with the opioid problem.

For Interior Secretary Ryan Zinke, this mission fits in with the department’s broader role of insuring healthy parks and healthy people. As secretary, he oversees both National Park spaces, like the Ellipse in President’s Park, where the memorial is located, as well as tribal reservations. On population percentage basis, Native American communities have been hit hardest by the epidemic. 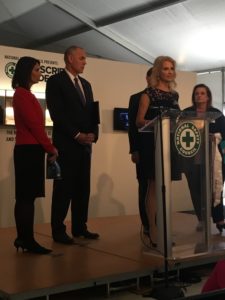 “We have a number of different law enforcement agencies that we have combined in a task force,” said Secretary Zinke, “and we are cracking down on dealers in coordination with our tribes. On our first raid, working in the Pueblos, in conjunction with that great nation in New Mexico, we had 304 stops, 11 arrests, 48 pounds of meth, worth $2.5 million on the street. We also confiscated $20,000 in marijuana, heroin, and other narcotics.”

The coordination between tribal governments and the federal government is only one level of the many partnerships being used to tackle the problem. As each of the secretaries stressed, combating the supply of drugs alone was not enough to halt addiction.

“To get out of this crisis, we have to understand how we got there in the first place,” said Azar. “Three out of four users of heroin in America start by misusing prescription opioids. That’s why President Trump has made reducing inappropriate prescribing of opioids a key piece of his recently announced initiative.”

In addition to reducing prescriptions, the administration is also working to limit the illicit supply of opioids and to provide high quality, compassionate treatment to addicts. Under the terms of a recently signed bill, the federal government will provide billions of dollars to fund new treatment, while working to cut prescriptions of opioids by one-third in the next three years.

The Department of Health and Human Services, home to the Food and Drug Administration, is leading a review of how opioid medications are prescribed, packaged, and paid for.

Keeping more faces from joining the walls of the memorial means both keeping pills off of the street and getting them out of home medicine cabinets. Many abusers first obtained opioid pills through unfinished prescriptions given to themselves or a relative. Both the NSC and the Trump administration are also scaling up pill collection efforts. The NSC is providing free, postage-paid envelopes for people to use to return unwanted pills and the administration is pushing two national takeback days under the purview of the Drug Enforcement Administration. These efforts have been remarkably successful at reducing the amount of medication sitting around in American homes, said Kellyanne Conway, adviser to the president. After a presidential speech on addiction earlier this year, more than 906 tons of pills were collected.

Even so, the numbers have far less weight than the faces carved into the pills of the memorial.