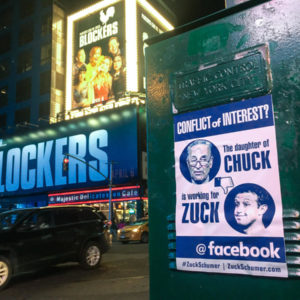 And when Sen. Schumer isn’t trying to ban your favorite bread at Subway, he’s sending out press releases calling for regulations on virtually every industry from Big Pharma to Big Breakfast Cereal to Big Grill Brush (once again—it’s a long story).

So what is the one business Sen. Schumer has expressed zero interest in regulating?  Facebook.  Which explains how the Poster Boy for Big Government wound up on a lot of posters across the Big Apple: 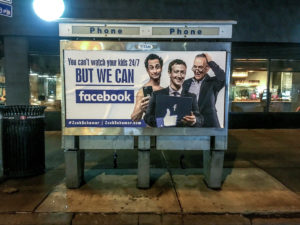 Street art featuring the faces of Sen. Chuck Schumer and Facebook founder Mark Zuckerberg morphed into one have appeared in New York City. Another round of posters stars the two men standing with a shirtless, smartphone-clutching Anthony Weiner and the message “You Can’t Watch Your Kids 24/7 But We Can!”

This art attack is the work of conservative street artist Sabo, who threw in some “Caution: Facebook Sells Your Data” street signs for good measure. And in doing so, he’s broken more news on the cozy relationship between Sen. Schumer and the Facebook empire than all the cable news networks combined.

How many Facebook users knew, for example, that Sen. Schumer’s daughter has an executive position at Facebook—a business her father would theoretically be involved in regulating?  Now they know, thanks to Sabo’s posters reading “Conflict of interest?… The daughter of Chuck is working for Zuck,” along with a thumbs-down version of Facebook’s ‘like’ icon.

Alison Schumer is a Privacy And Product Marketing Manager at Facebook, according to her LinkedIn page. And, coincidentally(?), her employer donated more political money to her dad than any other member of Congress.

Is that why, as the NY Post noted, the same U.S. Senator who complained that “a person’s cellphone should not become a James Bond-like personal tracking device for a corporation to gather information” has yet to launch a single press release against Facebook? 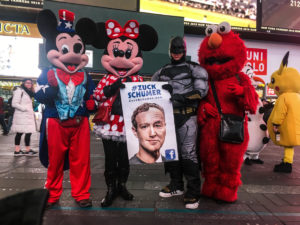 Why the same U.S. Senator who in the past called for regulation of the Olympic uniform manufacturing industry (seriously) has had so little to say about this multi-billion-dollar behemoth?  Actually, Sen. Schumer did say something:

“Facebook is a very powerful force,” Schumer told the left-leaning online mag Recode.net last month. “I think, overall, it’s been a very positive force and now people are taking advantage of the openness of the net. And Facebook has an obligation to try and deal with it.”

Schumer added: I’ve talked to them. I truly believe they want to.” It’s hard to imagine such sympathies for a private business coming from the senator who called for investigations into price-fixing in the breakfast cereal industry.

It appears, however, that regulation is likely coming to Facebook with or without Schumer’s support. Facebook is certainly preparing for it, boosting their spending on DC lobbyists from just $250,000 in 2010 to more than $11 million last year.

When the regulators strike, it’s likely to be through the Federal Trade Commission which, at the moment, is operating on cruise control due to vacancies in three of its five commissioner slots. In the Trump era, filling federal posts has been a slow and arduous task—due in part to politically-motivated delays led by people like Senator Schumer.  That has certainly appeared to be the case at the FTC—until now. 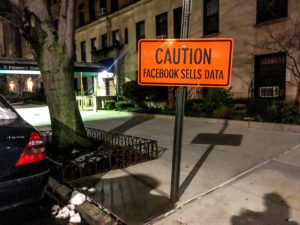 On March 26th, the Trump administration announced a new FTC nominee, Becca Kelly Slaughter. According to The Intercept, instead of the weeks or months it usually takes to get a confirmation hearing, Slaughter’s nomination may be considered as soon as April 11 when the Senate is back in session.  Why such speed?  Well, for one thing, Sen. Schumer is on board.

“Rebecca Kelly Slaughter will make an excellent FTC commissioner, “ Schumer said in a statement. And he should know. Slaughter’s current job is serving as “chief counsel to Senate Minority Leader Chuck Schumer, D-N.Y.”

And the person who recommended Slaughter for the FTC gig? Alison Schumer—Chuck’s daughter.

Will Sabo’s satirical posters do anything to break up this special relationship? Will it create more accountability between Sen. Schumer’s office and Facebook?  Probably not.

But look for Sen. Schumer to sponsor the “Unregulated Street Art Act of 2018” any day now.