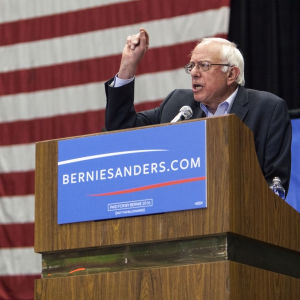 Harry Jaffe still remembers the exact moment he was introduced to Bernie Sanders.

The year was 1976, and Jaffe — now editor at large for Washingtonian Magazine — was a cub reporter in his twenties, cutting his teeth at the Rutland Herald in Rutland, Vermont.

While writing up a story in the newsroom, the young journalist caught snippets of a gubernatorial debate on television, and one candidate with a thick Brooklyn accent captured Jaffe’s attention.

There on the screen was Sanders, four decades before he would launch his 2016 Democratic presidential campaign, running for governor on the socialist Liberty Union ticket. With a mop of curly hair and big glasses, he was already taking on the establishment, railing against imperialism and cataloging the ways he felt the wealthy took advantage of the working class. He would get just 6 percent of the vote in that election, but go on to a storied political career in the Green Mountain State.

Jaffe hadn’t written much about that career until recently — he’s best known as co-author of “Dream City,” the definitive history of District of Columbia politics — but Sanders’ White House bid piqued his interest. This week he’s out with “Why Bernie Sanders Matters,” the first unauthorized biography of the man firing up liberals and taking on Hillary Clinton in this primary campaign.

Jaffe sat down with InsideSources for an extensive interview about his book earlier this month, offering takeaways from his research and reporting as well as personal impressions of the Vermont senator.

Here are 10 things the author learned about Sanders:

Jaffe described the Green Mountain State as sui generis politically. The province of farmers, hippies, liberals and libertarians, Vermont has a population of roughly 600,000 and maintains a culture of small town hall meetings with office seekers and elected officials alike. It also boasts what Jaffe calls an “acceptance of odd characters and different points of view,” which helps explain the rise of someone with Sanders’ unusual politics.

His appeal is all about economic populism.

“Nobody speaks the truth in a vernacular way to middle-class Americans who struggle everyday to pay the bills, to the college graduates who have to find work and be self-sufficient and pay their college loans,” Jaffe said. “[Sanders] speaks to the retirees who can’t retire. He speaks to the young family where the husband and the wife have to work in order to raise their children but can’t apply enough time to child rearing.”

He’s not a hardcore socialist — but he was when he was younger.

“A pure-and-simple socialist believes in government control of the means of production, and that’s not what Bernie Sanders believes in,” Jaffe said. “He’s more of a liberal, more of leftist, more of a progressive and frankly more of a populist than anything else. If you look at him from that perspective, then I think he’s very electable. I think he is vulnerable to being pigeonholed as a doctrinaire Marxist socialist, and I think there’s a time when that would have fit, in his twenties, when he was part of [the Young Peoples Socialist League]. That was when he was a heck of a lot younger. Now I think he’s just on the very left side of the Democratic Party, very much within the mainstream of liberal Democratic politics.”

His nuanced stance on guns will accrue to his benefit.

Sanders has taken heat from Democrats for voting against some gun control measures, but Jaffe said his background representing a rural state with a strong gun culture will broaden his appeal beyond urban America: “The odd thing about Sanders is that he’s a city guy who wouldn’t know the end of a shotgun from the end of a toilet paper role, and yet he’s had to accommodate the fact that he comes from a state where there are no [gun control] laws. You know, people just have rifles in their closets.”

He has a hard time pivoting from his focus on inequality.

“I think it’s painful for him to have to turn his attention to foreign affairs,” the author added. “He does it begrudgingly. It’s not his issue.”

He would be, in Jaffe’s view, “a lousy commander in chief.”

He’s “a prick” and “an asshole” to his staff, known as “a screamer and a table-banger.”

For these reasons, Jaffe said the word some people used to describe Sanders’ attitude toward his employees was “abusive.” (The senator’s field director Phil Fiermonte saw it differently, telling the author that Sanders just has high expectations.)

His past may yet cause him controversy.

“The religious conservatives are not going to be happy about the fact that he has a son out of wedlock,” Jaffe said in reference to Levi Sanders, the subject of “Bernie Sanders Has a Secret” in Politico Magazine.

He added that the elder Sanders had avoided the draft during the Vietnam War  in a “very suspect” way.

“He was of age,” Jaffe said. “He didn’t dodge the draft, but I think it’s safe to say he avoided the draft. He filed for [conscientious objector status] on religious grounds, but there’s nothing in Judaism that says you can’t fight a war. The Israelites were pretty damn good at fighting.”

Challenges notwithstanding, it’s possible for him to win the primary.

“He’s really smart about money,” Jaffe said. “He’s very frugal. He will gather contributions and hold on to them. He’s a cheap bastard. So while Jeb Bush is burning through millions of dollars, Bernie Sanders is holding on to millions of dollars.”

Jaffe further noted that Sanders’ seriousness is reflected by the top-flight campaign consultants he hired. His team includes longtime strategist Tad Devine and the digital gurus at Revolution Messaging who were behind President Barack Obama’s 2008 campaign.