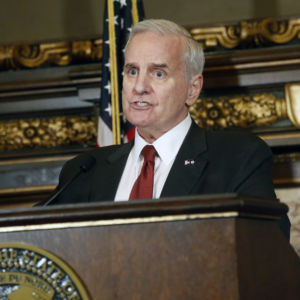 The Service Employees International Union (SEIU) formed the bargaining unit in the state back in 2014. SEIU Healthcare Minnesota claimed they successfully organized 27,000 people who are registered as Personal Care Assistants (PCA). The union has since faced allegations that it engaged in fraud to win that vote.

Minnesota PCAs (MNPCA) was launched to help members who were opposed to the union. The MNPCA went directly to the state capitol building to deliver the signatures to the governor. His administration has been accused of obstructing the decertification campaign to benefit the union.

PCA Kris Greene became the face of the campaign early on for her opposition to the union. She has taken care of her daughter for several years and felt the union rules made it more difficult. She joined a handful of other care assistants who delivered the signatures alongside groups that have helped in the decertification campaign.

The Center of the American Experiment, the Center for Independent Employees, and the Center for Worker Freedom have helped the campaign throughout the decertification effort. Former Republican state Sen. Al DeKruif also joined the care assistants when delivering the signatures. DeKruif is currently a PCA, as well.

The MNPCA campaign began to suspect something was amiss last year while reaching out to members. The PCAs weren’t traditional employees so the campaign had to canvass across the state to collect signatures. Many PCAs were just people who worked in homes to help people collecting Medicaid.

The campaign originally began canvassing the state to show enough care providers wanted to hold a decertification vote. The membership list that the state provided appeared to be completely inaccurate. The addresses listed allegedly led to empty lots and homes with residents that didn’t match the name provided.

Labor unions can often require mandatory dues but in this case, they were prevented because of an earlier U.S. Supreme Court ruling involving home healthcare providers in Illinois. The MNPCA campaign, however, began suspecting possible instances of identity theft, unlawful due deductions, and voter disenfranchisement.

The MNPCA campaign filed legal statements petitioning the state to investigate whether the original union election was fraudulent. The state appeared to do little to help, raising suspicions it was trying to help the union. Dayton, however, has presented himself as a neutral outside party.

MNPCA Attorney Doug Seaton went to court in order to demand the state provide an accurate membership list. The union and state allegedly stonewalled but eventually were forced to abide. The second list seemed inaccurate too. Several more complaints later and the decertification campaign had three lists that were completely different from one another.

Minnesota lawmakers allowed the union to organize all home healthcare workers as a single bargaining unit by passing a law dictating they are state employees simply because they collect Medicaid funds. Dayton tried to do the same in 2011 through an executive order, but it failed in the courts.

The SEIU Healthcare Minnesota has reportedly hit back against the decertification campaign. The MNPCA campaign was accused of coercing members into signing cards to authorize the decertification vote. SEIU supposedly sent a letter listing 12 members who claimed to have been coerced by the canvassers.

The MNPCA campaign is planning on returning to court to fight the alleged obstruction in October. SEIU Healthcare Minnesota and the administration did not respond to requests for comment by InsideSources.