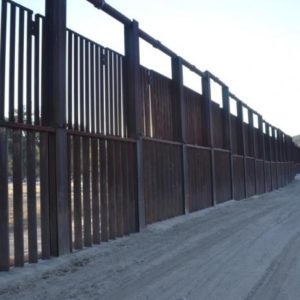 The U.S. Defense Department (DOD) is diverting $125 million from projects at two New Mexico military bases to help pay for President Trump’s border wall — and the decision has the state’s congressional delegation in an uproar. However, others defend redirecting the military funds to what they see as a key element in America’s national defense.

The DOD decision postpones an $85 million project to refurbish an unmanned aerial vehicle training facility at Holloman Air Force Base, near Alamogordo in Otero County. It also delays a $40 million project for an information systems facility at White Sands Missile Range, which spans five counties in southern New Mexico and was the site of the first U.S. atomic bomb test.

Members of the New Mexico congressional delegation responded with fury.

New Mexico Sen. Tom Udall called the decision an “outrageous and reckless action by President Trump and his administration.”

“Congress did not appropriate this money for the president’s vanity project, we appropriated it for projects that are key improvements for our service members in New Mexico and for our national security,” Udall said in a statement. “Our men and women in uniform at Holloman, White Sands, and across our state and our country deserve better. Putting a political pet project ahead of our armed forces and our national security is shameful.”

“I visited the current RPA [Robotic Process Automation] training facility at Holloman earlier this year,” fellow New Mexico Sen. Martin Heinrich said in a news release. “The building is falling apart, with some equipment being held together with duct tape. To say this facility, which supports training for 100% of the Air Force’s MQ-9 [drone] crews, urgently needs to be replaced would be an understatement.

“The White House is also threatening funding to replace an outdated testing and evaluation facility at White Sands Missile Range that was built in 1962 and recently caught on fire,” Heinrich said.

The $125 million was part of $3.6 billion in military spending redirected by Defense Secretary Mark Esper from 127 military construction projects to build 175 miles of the wall. Esper wrote in a letter to House Armed Services Committee Chairman Adam Smith (D-Wash.) that the funds would go to 11 projects along the border.

“These projects will deter illegal entry, increase the vanishing time of those illegally crossing the border, and channel migrants to ports of entry,” Esper wrote. “They will reduce the demand for DOD personnel and assets at the locations where the barriers are constructed and allow the redeployment of DOD personnel and assets to other high-traffic areas on the border without barriers.”

“President Trump’s reckless decision to rob our service members and shortchange critical defense projects puts our national security at risk,” Luján said in a statement. “Our service members depend on these critical funds to keep our families and country safe.”

Not everyone was opposed to the DOD actions.

Caren Cowan, executive director of the New Mexico Cattle Growers’ Association, called the action “appropriate.” The association has supported building of the wall from the outset as it is comprised of ranchers who live and work near the border.

“We’re facing a tremendous national security issue on the Mexican border and it would seem appropriate that defense funds are used to defend our country on the southern border,” Cowan told InsideSources.

When asked if stopping the projects at the two bases was of concern, Cowan said.

“Unfortunately federal dollars are a balancing act — and it’s all important — but our members on the border need to be safe and their families [as well].”

Tom Leland Taylor, president of the Albuquerque Tea Party, agreed that the wall was part of the country’s defense, so diverting the funds made sense.

“We fight for sovereignty and we need to protect that sovereignty with a wall,” he told InsideSources. “So the wall is a line of defense — it is part of our national defense system — so it is totally justified to divert the money.”