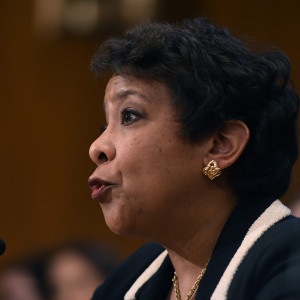 Loretta Lynch: U.S. ‘Not Asking for a Backdoor’ Into Encryption

United States Attorney General Loretta Lynch said Friday the government is not seeking a backdoor into encrypted communications, but wants to work with companies offering such services on a solution to surveilling criminals and terrorists “going dark” online.

“We in the U.S. government are not asking for a backdoor,” Lynch told the World Economic Forum in Davos, Switzerland Friday. “We’re asking to work with Silicon Valley to make sure that as we preserve encryption we also preserve what we currently have, which is the ability for companies to respond to law enforcement warrants — court-ordered, court-authorized requests for information.”

Lynch conceded encryption is important to privacy and cybersecurity in today’s digital environment, but said the government and the tech sector have a ways to go before they come to an agreement.

“I think that’s ongoing,” Lunch said of talks with the tech sector. “They have some genuine points of view that are based in recognizing the value of encryption. At the same time, they’re responsible companies that don’t want to provide a model for terrorism. I think we’re all struggling with this issue.”

The NSA and U.S. Cyber Command head said privacy and security are equally important, but at odds in terms of national security.

“Concerns about privacy have never been higher. Trying to get all those things right, to realize, that it isn’t about one or the other,” Rogers said. “We’ve got to meet these two imperatives. We’ve got some challenging times ahead of us, folks.”

Comey has also changed tune on encryption in his year-plus campaign for legislatively mandated backdoors into encryption products on Capitol Hill, where he told lawmakers last month he doesn’t believe it’s a technical issue, but rather a business model companies advocate in pursuit of consumer trust.

“Lots of companies do it today — provide secure services and comply with court orders,” Comey told the Senate Judiciary Committee in December. “There are others who built their business models so that they say, ‘even if we want to, we can’t.’”

McCaul and Warner’s bill would establish a congressional commission to facilitate talks between the government and Silicon Valley aimed at finding a solution. According to Burr and Feinstein, that could take too long.

“Here’s the problem,” Feinstein said. “If the Internet goes totally dark, and there are apps that people can use to communicate to plot, to plan, to threaten, to do all of that, you’ve got a real problem.”

President Obama has repeatedly mentioned discussing the issue with Silicon Valley since the Islamic State-inspired attack in San Bernardino in December. The administration, which stepped back from calling for backdoors last year, is expected to stake an updated policy stance on encryption sometime early this year.