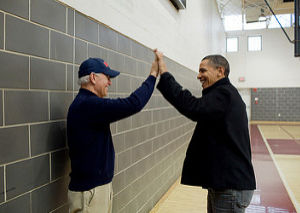 Josh Alcorn is making his argument.

The senior advisor to the Draft Biden Super PAC had a two-page memo featured in Politico’s influential Playbook newsletter Tuesday, giving his pitch for the vice president as a 2016 presidential candidate.

If nothing else, the document offers insight into why Biden’s strongest supporters think he can compete in the Democratic race, despite Hillary Clinton’s strength in early polling and the progressive love for Bernie Sanders. Here are three of the most telling quotes:

“The race for the 2016 nomination is still very much up for grabs.”

It would be hard to generate support for Biden if Democrats were overwhelmingly behind Clinton — or if they saw her nomination as a foregone conclusion. Luckily for Alcorn and his colleagues, the Sanders phenomenon suggests this isn’t true. Some Democrats, at least in early primary states, are looking for something different. Plus, Clinton certainly didn’t turn out to be inevitable in 2008, and there have been several instances in recent history when eventual nominees weren’t early frontrunners. (An example Alcorn cites in his memo is Howard Dean’s popularity in 2003 and early 2004. Remember these Time Magazine covers?)

The trouble for Biden is that 2008’s protracted primary battle demonstrated that Clinton did have staying power, and the former Secretary of State is unlikely to face the kind of massive movement that mobilized behind Obama seven years ago. A repeat defeat for her certainly is possible, but seems much less likely, especially once Super Tuesday arrives. Clinton’s greatest threat may be getting hurt by self-inflicted wounds such as the controversy over her emails at the State Department.

Biden’s critics say he’s a “gaffe machine.” News organizations have compiled long lists of his verbal blunders. But if these statements can be framed as evidence of authenticity — human moments that seem especially relatable as many politicians are infuriatingly scripted — then perhaps voters will embrace the vice president in spite of his faults.

RELATED: The Authenticity Chronicles: How ‘Realness’ Has Factored Into Every Presidential Election Since 1988

The broader question of likeability, which has plagued Clinton in the past, could help Biden as well. There’s also the fact that voters undoubtedly feel sympathy for him following the death of his son Beau — the latest in a series of Biden family tragedies. That Beau, Delaware’s former attorney general, reportedly urged his father to make a 2016 run before he died would only make the vice president’s story more compelling.

“We are asking you to keep an open mind and consider a Biden candidacy.”

This quote, which comes at the very end of the memo, may be the most telling of all. Regardless of all the aforementioned arguments, there is still a sense that Democrats would need to be persuaded to give Biden a shot. Clinton did much better than he did in the 2008 primary. There’s no great grassroots call for him to run now. Until two weeks ago, even the official Draft Biden group was simply “a ragtag group of junior operatives working out of a collective office space in downtown Chicago,” according to Politico.

Draft Biden said Alcorn was unavailable for an interview Tuesday.

On Monday, White House press secretary Josh Earnest did nothing to tamp down talk about the vice president, telling reporters the Biden is exceptionally qualified to make a 2016 run. “I think you could probably make the case that there is no one in American politics today who has a better understanding of exactly what is required to mount a successful national presidential campaign,” Earnest said. Those comments came on the same day that Biden reportedly received Obama’s “blessing” to run during a lunch with the president at the White House.