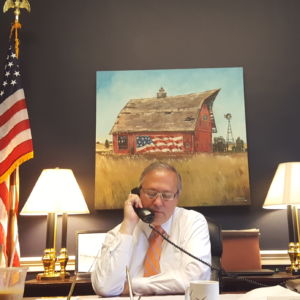 As I arrive at the Cannon House Office Building at the U.S. Capitol at 7:45 a.m. on a Wednesday, the halls, which will be bustling later in the day, are empty. Most offices are dark. Few staff and no members of Congress are to be seen. But when I reach David Young’s office, his team has already started its day, and Young is in his first meeting.

I came to the Hill to shadow the first-term congressman and see how Young has adjusted after serving a year and a half of his first two-year term.

Every Wednesday, Young calls into radio stations in Iowa’s third congressional district, which occupies the southwest corner of the Hawkeye State, from Des Moines to Council Bluffs. His task this morning is to remind listeners of upcoming events in the district.

When I met with Young, the congressional recess was about to start, and one of the radio hosts asked if Young would be attending the Republican Convention in Cleveland. “I’m going to be in Iowa. I want to be home,” responded Young.

It is clear that Young loves his district. While many members prefer to remain in Washington, Young returns to his district every weekend. He works Saturday and Sunday in Iowa, and then its back to DC on the first flight out of Des Moines Monday morning. It’s a brutal schedule, but Young has been committed to making sure his constituents know they can count on him to listen to their concerns. Young visits all 16 counties in his district every month.

As Young heads home for the recess, he tells the radio host he’ll have no vacation time. That weekend, he was preparing to visit the Montgomery County Fair. Young’s district has 16 counties but 17 county fairs, as one county is divided east and west.

Young told me later in the day how much he loved the Dallas County Fair growing up in Van Meter, Iowa. He didn’t have animals, but he did a photography project, and his time in 4-H contributed to his leadership development.

The radio interviews this day were also an opportunity for Young to encourage seniors in his district to attend one of the upcoming Wellness and Security Expos the congressman was organizing. Young approached nonprofits and government agencies to join in these events, which are designed to help navigate Medicare and Social Security and also keep constituents informed of the latest scams being used to defraud seniors. The congressman explained to me how constituents have been robbed of money as fraudsters had called claiming to be from the IRS and other instances where con artists pretended to be a senior’s grandchild in trouble on spring break and in need of money to be wired to them.

Young may only be a freshman member, but he knows how to get things done in Congress. Before running for House, he was a top aide to three U.S. Senators, including Iowa’s Chuck Grassley. When he ran for Congress for the first time in 2014, he faced a nearly impossible race. Young had a six-way Republican primary contest and a tough general election campaign. He sat down with InsideSources for the very first interview to appear on our site at a time when nobody expected he could win. But Young prevailed.

Despite being in Washington most of the week, Young has held 685 meetings and tours in his district since the start of 2015. He has held 830 meetings with Iowans visiting Washington, D.C. I witnessed several of these as Young squeezed meetings into an impossibly busy schedule. While simultaneously participating in an important Appropriations Committee markup, Young would slip out into the hall to meet constituents for 10 minutes and listen to their concerns. And yet despite his travel schedule and constant meetings, Young has missed none of the 865 votes cast in the House this session.

Inside that Appropriations meeting, Young also had an essential role. He said it was “important to provide an Iowa perspective on the committee,” where his predecessor, Tom Latham, had also served, along with Tom Harkin and Neal Smith, who both represented Iowa in Congress. Young now carries that torch, and he’s used his position to work to cut off funding from the Environmental Protection Agency’s Waters of the United States rule that worries many Iowa farmers.

More federal regulation will be pushed out in the final months of the Obama administration, explains Young. During one of the meetings outside of the Appropriations markup, Young heard from an Iowa small businessman who was concerned about an obscure new regulation that could derail his company. Young assured him he already knew about the rule and was working to stop it.

Young loves hearing from constituents. His office has received and responded to 669,000 letters, calls, and emails during this first term. Young acts on constituent concerns. One of those calls his office received was someone desperately needing help. As a result of that call, Young was shocked to learn that the veterans suicide hotline does not always have a live answerer available to take calls. He responded by authoring a bill to fix this problem. It is likely to pass the House.

David Young may well be America’s hardest working congressman. And he’s kept up his impossible schedule while refusing to accept a paycheck. Not that he’s rich or doesn’t want to be paid, but Young cosponsored legislation to dock Congress’ pay until it passes a budget, which Congress is required to do, by law, before April 15. Congress has declined to pass either a budget or the pay docking bill, but Young has refused to accept his paycheck anyway. Perhaps the historic unpopularity of Congress could be solved if more members emulated the David Young model.

My day with Young revealed both a quirky and caring man. Whether a constituent, staff member, member of Congress, or random stranger, Young relished each encounter. He chatted with interns on elevator rides and offered a warm Iowa greeting to others we met as we ventured through the halls of Congress. At the Appropriations markup, he had two large iced coffees for the endurance meeting. He poured out those coffees and passed cups to the other members of Congress sitting nearby. Young’s energy seems unstoppable, and he tries to keep his fellow members awake and doing the same.