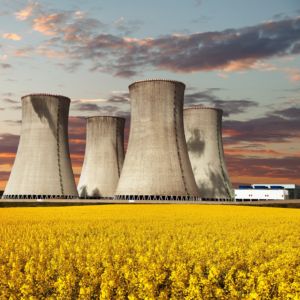 Is the atomic age over? For decades, nuclear power seemed like the perfect energy solution, both efficient and carbon neutral. If the problem of properly disposing of nuclear waste could only be managed, the world may have found the solution to its energy needs. As the beehive hairdo fell out of fashion, so did nuclear power, with citizens increasingly worried about the potential for environmental contamination and harms to public health. New advanced nuclear technology may give nuclear power a second chance, however, offering clean nuclear power at a price 40 percent lower than current technology.

A study by the Energy Innovation Reform project found that advanced nuclear technology could produce electricity at a cost 40 percent lower than the cost of conventional nuclear power. Not only are advanced nuclear plants cheaper, the research suggests that they may be safer than conventional plants as well.

“Advanced nuclear technologies represent a dramatic evolution from conventional reactors in terms of safety and nonproliferation, and the cost estimates from some advanced reactor companies—if accurate—suggest that these technologies could revolutionize the way we think about the cost, availability, and environmental consequences of energy generation,” the researchers found.

Advanced nuclear power plants take advantage of many different technological innovations. One key example is construction, which accounts for about a third of the cost of opening a new nuclear plant. Of these expenses, the lion’s share of the costs go to “indirect services” which include engineering during construction and project management costs, as well as the price of temporary buildings and equipment rental. New technology allows builders of nuclear plants to potentially lower their construction costs without sacrificing safety. The concrete and steel used in construction must meet strict requirements and plant designs are held to strict safety standards.

When companies build advanced nuclear power plants, including molten salt reactors, which use molten salt as a coolant, and high-temperature gas reactors, which use helium for the same purpose, these and other advanced nuclear technologies take advantage of a modular design which both minimizes the number of pumps and systems used in the plant, and allows for sections to be mass-assembled off-site.

“Advanced nuclear plants require the same high levels of expertise and oversight during their construction and operation as conventional plants, but advanced reactors have simpler and more reliable safety systems and require relatively less safety-related oversight, due to their neutronics and thermal-fluidic properties,” the researchers found. “This enables the possibility of providing a greater level of safety at lower cost.”

The average levelized cost of electricity from all participating companies came out to $60/MWh, 39% lower than the $99/MWh expected by the U.S. Energy Information Administration for conventional PWR nuclear plants entering service in the early 2020s.

“Advanced reactor companies are developing plant designs in ways intended to avoid the nature and scale of risks associated with these highly customized, site-built projects,” they wrote. “This includes high levels of modularization and standardization in plant designs, as well as exploring new manufacturing strategies and business models to limit the risk of cascading schedule delays and the amount of up-front capital needed.”

Despite the promises of advanced nuclear energy, the researchers caution that the new technology is still years away from wide-spread adoption.

The report comes at a particularly significant time, when regulators are in the process of reconsidering how nuclear power should be treated under regulatory policies aimed at both promoting green energy and reducing carbon. Earlier this year, Exelon, a Pennsylvania electric company, announced that it would close the Three Mile Island nuclear power plant unless state legislators provided policy incentives to keep the plant open. Previously, Exelon had been able to negotiate concessions from lawmakers in Illinois which allowed them to keep two nuclear power plants open in the state.

Similar debates are taking place across the country. In New York and Illinois, generating companies running nuclear power plants have taken state regulators to court to challenge nuclear’s exemption from zero-emissions generation subsidies. In the suit, the generation companies had argued that the portion of the electric generation market currently handled by state regulators instead falls under the jurisdiction of the Federal Energy Regulatory Commission because of the Federal Power Act. The generation companies hope that under federal authority, they will find it easier to compete with state subsidies for green energy.