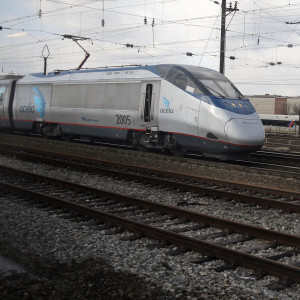 After covering a press conference Tuesday in New York featuring Al Gore and the attorneys general of several states, I got on the 2 p.m. Acela to head back to D.C. I considered the Quiet Car after being subjected to the morning conference calls of all my fellow passengers heading to New York at 7 a.m., but to my good fortune, I passed that car and sat down at a table that I had to myself all the way to Philadelphia, which happens to be the site of the Democratic National Convention.

Two passengers getting on sat down at my table, and based on their conversation with each other, I quickly realized my new tablemates are staffers for the Democratic Governors Association. We will spare using their names, though they were easily identified once I did some Google searches after getting off the train.

The pair had been in Philadelphia for the day scouting venues to be used for convention events. I didn’t take much note of their conversation with each other, but I was interested when they began making calls to Democratic donors and discussing, among other things, the New Hampshire governor’s race.

Considering that I recently purchased and am in the process of relaunching a political news site in New Hampshire, the conversation was intriguing.

During one call, a donor was unfamiliar with Colin Van Ostern, the New Hampshire executive councilor who is running for governor. It seemed based on the conversation that Van Ostern is going to be part of an upcoming event with Democratic governors. Responding to a question from the donor that presumably was on whether the DGA was backing Van Ostern in the primary, the staffer explained: “We don’t have a position on it, but it looks like things are going his way.”

This is likely disappointing news for Mark Connolly, a former New Hampshire deputy secretary of state also running for the Democratic nomination. He was 6 points (with a 4.6 percent margin of error) behind Van Ostern in the only public poll conducted on the race. A full 64 percent of Democratic primary voters are undecided. Connolly polls slightly better than Van Ostern in hypothetical matchups with Republicans.

Such conversations between party officials and donors can help to funnel money to favored candidates even while an organization like the DGA can officially remain neutral in the primary.

There is a lesson here for all Acela passengers: Someone is probably listening and taking an interest in your conversation. The Acela is filled with people who work in politics and the media, so it’s probably best to exercise caution in what you say. Political operatives should assume some level of paranoia about this truth.

This is not the first time an overheard Acela conversation has been reported. In 2013, political activist Tom Matzzie began live tweeting as he listened to former NSA Director Michael Hayden on the phone with a reporter giving a background interview as “a former senior admin official.” According to Matzzie, Hayden’s quotes were disparaging of the Obama administration.

The incident between Matzzie and Hayden sparked so much attention that HBO’s The Newsroom used a similar Acela conversation as a plot point. Maggie, played by Allison Pill, clandestinely records an EPA official speaking on the phone.

Hayden summed up the lesson for Acela riders after he was tipped off to Matzzie’s presence on the train. He walked over to Matzzie. “Would you like a real interview?” he asked. Matzzie explained he was not a reporter. “Everybody’s a reporter,” said Hayden.