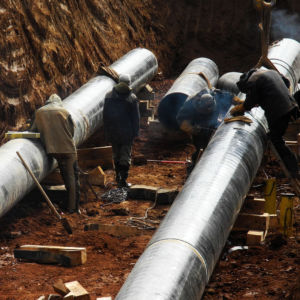 Last week, environmentalists and indigenous rights activists spoke for hours at a Public Utilities Commission (PUC) meeting in Minnesota, hoping to stop the expansion and reconstruction of the Enbridge 3 pipeline in northern Minnesota. On Thursday, the PUC released its decision, announcing that it approves and issues Enbridge a Route Permit outlining the terms of construction. This marks a midpoint in the approval process, since the company will also need to acquire federal permits from the U.S. Army Corps of Engineers. For environmentalists, the decision is a setback, but also a transition point, as they vow to continue to fight the project and hint that a second Standing Rock may be in the cards.

“The Public Utilities Commission has just approved the Certificate of Need for Line 3. Enbridge and Minnesota have their Standing Rock,” said Native American environmentalist Winona LaDuke after the decision was announced.

Her words echoed the sentiments of a protester who suspended himself from a steel structure outside of the PUC’s building in downtown St. Paul.

“If the PUC doesn’t stop Line 3, then we will,” he said. In a press release, he expanded on his ideas, stressing that he stood with the Ojibwe tribes in resistance to infrastructure construction on what they consider “occupied land.”

It may not be time to dig out the tents and start building the protest camp just yet. Under state law, pipeline opponents have 20 days to appeal the PUC’s decision. Already, at least one Ojibwe tribe has said that it intends to file an appeal.

“The Fond du Lac [Ojibwe] Band is prepared to appeal this decision and we will evaluate our options as we receive the full written decision from the Commission. In the meantime, our employees will continue their critical work surveying for tribal cultural properties that must be protected along the route of the pipeline expansion proposed by Enbridge,” the tribe said in a news release.

Meanwhile, Stop Pipeline 3 coalition has already formed in northern Minnesota. Before the PUC meeting, the group paid to install two billboards along the proposed pipeline route, handed out stickers, and opened a cultural camp. So far, no official protest camp, like the Sacred Stones camp constructed outside of Cannon Ball, ND in 2016 has been planned, but this may change in the future.

“The wild rice, climate, the water, and the lives of thousands of indigenous peoples of Minnesota are at stake. No matter what, we must keep fighting. The governor and many of our representatives are on our side, this isn’t the end only a beginning. Stay tuned for more actions and ways to continue to fight line 3,” the group said in a statement, before directing people to their website.

The protest groups are hoping that the PUC’s decision can be overturned in the appeals process, or that the pipeline will be denied federal permits. Thus far, Minnesota Governor Mark Dayton has played coy on the issue, releasing a statement urging both sides to express their “passionate views” peacefully.

“Those regulatory reviews, which address numerous issues not considered by the PUC, will take several months. Approvals are by no means assured, and they would require any such project to meet Minnesota’s highest standards, protecting all our state’s earth, air, water, natural resources, and cultural heritage,” he said in a statement.

At this point, resistance to the Enbridge 3 project remains split between several different groups and is relatively unorganized. Even so, a more formal protest could quickly organize and state officials are certainty considering the likelihood of a large-scale protest. In a potential sign of trouble to come, the PUC’s approval included several conditions, including requiring Enbridge to pay for additional law enforcement costs due to social unrest and to outline a plan to attempt the prevention of sexual trafficking.

The decision was not easy for the PUC commissioners, many of whom empathized with safety concerns about the pre-existing pipeline. Ironically, worries that the original line, which dates back to the 1960s, would leak influenced the final decision. Many of the speakers opposing the project had rejected a plan which would have updated the existing line, but did not offer any alternatives.

Before construction can begin, Enbridge must also secure permits from the Army Corps of Engineers, a process that is also open for public comment.