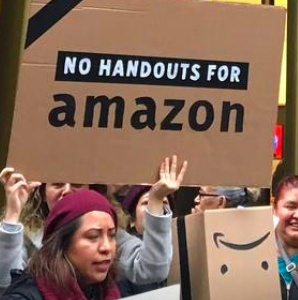 The current crop of Democrats seeking their party’s presidential nomination have made it clear who they’ll be coming after once they’re in the White House: Big corporations and the wealthy 1 percent. Candidates like Sen. Cory Booker and Kamala Harris echo the sentiments of Sen. Elizabeth Warren, who has all but declared war on “these rich guys who have been waging class warfare on the middle class for decades” through a “rigged system that props up the rich and powerful, but kicks dirt on everyone else.”

So when news broke that Amazon–the world’s third-most valuable company, run by the world’s richest man—paid zero federal corporate income taxes on their $11.3 billion in US profits in 2018, what did these candidates have to say about it?

No statements, no speeches, not even a tweet. Despite the fact that 2018 was the second year in a row Amazon avoided paying U.S. corporate taxes and, in fact, received a $129 million refund. Progressives like Warren, Booker and Harris have issued public statements on a wide array of topics in the past week, from Jussie Smollett to support for using paper ballots in elections, but not a single note about Amazon’s zero-dollar corporate tax bill.

And the question some campaign observers are asking is, “Why?” In a political moment dominated by economic populism and calls for open class warfare from Democratic leaders like Rep. Alexandria Ocasio-Cortez, why aren’t progressive presidential candidates making Amazon the poster child for corporate greed?

A notable exception is Sen. Bernie Sanders, who tweeted out a news story reporting the Amazon tax bill and his observation that, “If you paid the $119 annual fee to become an Amazon Prime member, you paid more to Amazon than it paid in taxes.”

If you paid the $119 annual fee to become an Amazon Prime member, you paid more to Amazon than it paid in taxes.

Our job: Repeal all of the Trump tax breaks for the top 1% and large corporations and demand that they pay their fair share in taxes. https://t.co/qDt4YoL5Z4

Sanders has been singling out Amazon for its tax avoidance and oversized political influence for years. Interestingly, so has another populist, President Donald Trump. When the company avoided all U.S. corporate income taxes last year, Sanders called them out on it, and in September he proposed the Stop Bad Employees by Zeroing Out Subsidies, or “BEZOS Act, targeting the online retail giant and its CEO Jeff Bezos. The bill would tax corporations for every dollar that their low-wage workers receive in government benefits like food stamps or Medicaid.

No other 2020 candidate is even close to matching Sanders’ aggressive stance toward a corporation that, on paper, embodies everything progressive candidates are waging war against on the campaign trail.  But other than a few remarks about Amazon’s decision to withdraw plans for a new corporate headquarters in Queens, NY, (“The fact that Jeff Bezos wanted our taxpayers to pay for his helicopter landing pad just shows how disingenuous he was from the beginning,” said NY Sen. Kirsten Gillibrand, another 2020 contender), they’ve been silent.

Some Amazon critics credit the company for what they call an effective, if evil, communications strategy.

“Why have politicians been so silent? I’m guessing somewhere in Amazon’s executive office someone said, ‘Look, if we’re going to pull the plug on New York [the HQ2 project] anyway, let’s do it now while the tax bill comes out. That way people will be totally distracted from it,’” says Bob Engel of the corporate watchdog group Free & Fair Markets Initiative. “If you’re gonna rob a bank, rob it on a day the FBI is busy.”

Engel, a longtime critic of Amazon, told InsideSources that “Amazon is a company whose business strategy is really based on gaming the system,” highlighting its political utility as a target for tax-the-rich progressives.  And yet the company has largely gotten a pass, perhaps because of an area of math not directly related to taxes: Polls.

A July 2018 survey by the Baker Center for Leadership and Governance asked Americans to rate their level of confidence in 20 U.S. institutions, including the military, the media, and the courts. And the number one most trusted institution among America’s Democrats was…

(It was also the second-most trusted institution among Republicans, just behind the military.)

Writing about what she calls this “frankly embarrassing (for Democrats) poll” at the liberal website Slate, Nicole Karlis notes: “From an objective standpoint, Amazon’s values — like any for-profit corporation — don’t exactly line up with those of a democratic society that promotes wealth equality and opportunity for all.”

“I blame Congress,” says Matt Gardner, a senior fellow at the Institute on Taxation and Economic Policy which first released the news of Amazon’s zero corporate tax bill.

“Unless we see the actual tax returns, nobody can say exactly how Amazon avoided paying any corporate income taxes, but the available information makes it clear that three provisions in the tax code were very important: The research and development tax credit, the ability to write off 100 percent of investments in equipment, and the ability to deduct stock options to employees from taxable earnings,” Gardner told InsideSources.

“While the Trump tax bill made some changes, all three of these have been part of the tax code for a long time. Congress could have eliminated or reformed them. They knew full well what the impact would be,” Gardner said. “Politicians talk all the time about ‘closing loopholes,’ but the conversation never goes any further.”

Gardner adds that this blame “comes with a big asterisk, because lobbyists are on Capitol Hill pushing for these tax policies,” but are progressives pushing back? Do opponents of so-called corporate greed like Warren, Booker or even Bernie Sanders really want to close the R&D “loophole?” Do they oppose allowing companies to deduct the costs of equipment, or reject the law (proposed and enacted by President Clinton and a Democrat-controlled Congress in 1993) allowing the stock option deduction?

If so, they rarely mention it on the campaign trail and it doesn’t appear on their campaign websites. (Booker, Harris and Warren’s campaigns declined repeated requests for comment.)

These senators are also no doubt aware of the fact that Jeff Bezos isn’t just the CEO of an online company with 100 million Amazon Prime subscribers, but he also owns the The Washington Post, one of the most influential newspapers in America that reaches many Democratic primary voters.

The Post’s motto is “Democracy Dies in Darkness.” Perhaps. But that certainly seems to be where you’ll find the Democratic candidates’ debate over Amazon and tax policy.