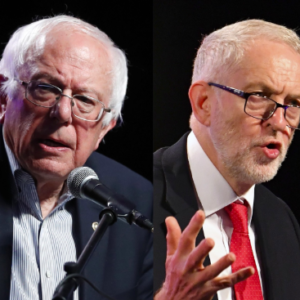 The same day Jeremy Corbyn’s Labour Party was going down to defeat in Great Britain — in part due to his party’s uncomfortably close relationship with anti-Semitism — an American Jewish group became the latest to demand Corbyn’s ally Sen. Bernie Sanders disavow his anti-Semitic surrogates and supporters in the 2020 presidential campaign.

Sanders’ troubles began Thursday with a statement from J’accuse Coalition for Justice, a think tank dedicated to combating anti-Semitism, over Sanders’ decision to campaign with notorious anti-Semitic congresswoman Ilhan Omar (D-Minn.) in the key primary state of New Hampshire.

“Given the critical role New Hampshire plays in shaping our presidential elections, Democratic primary voters have an obligation to hold Senator Bernie Sanders accountable for the people he associates with his campaign,” Executive director Zach Schapira told InsideSources. “Now, in the immediate aftermath of the most recent anti-Semitic attack in Jersey City, it feels particularly insensitive for him to choose to appear alongside someone who has had a troubled history with anti-Semitism.”

A day earlier, the American Jewish Congress released a letter urging the Vermont senator to stop using anti-Israel activist Linda Sarsour as a campaign surrogate as well. Sarsour, who the group describes as having  “a long history of flagrant anti-Semitism and hatred for the State of Israel,” campaigns for Sanders.

“Speaking at the American Muslims for Palestine conference in Chicago, Sarsour started by criticizing progressive Zionists and ended with the claim that Israel ‘is based on supremacy, built on the idea that Jews are supreme to everyone else’ — literally connecting and equating Israel with Nazi ideas of White Supremacy,” the AJC’s president Jack Rosen complained in his letter.

“Senator Sanders, while you decline to refute her claims and distance yourself from her bigoted and hurtful comments, Linda Sarsour is not only feeling emboldened, but she is also getting a national platform to spew hate against Jews and the state of Israel,” Rosen wrote.

On top of that, earlier this week a Sanders staffer was forced out over anti-Semitic tweets about “Jew money.”

Given the similarities between Corbyn and Sanders, it’s hard not to notice a similar pattern.

“Many writers, not only on the left, detected parallels between the rise of Corbyn and the movement around Bernie Sanders,” writes leftwing journalist Jonathan Chait. And as the Guardian reported last month, “campaigners for US presidential hopeful Bernie Sanders have been lending their support to the Labour party.”

“Many Labour International and Momentum members have been volunteers on Sanders’ campaign and so the favour’s being returned,” a spokesperson for the grassroots Labour campaign group Momentum said.

Now that Labour has suffered a massive defeat, in part due to the widespread anti-Semitism in Corbyn’s party, the spotlight is on Sanders’ easy relationship with anti-Semites. Corbyn’s fall is also a reminder to Democratic primary voters that, even if they are prepared to ignore Sanders’ anti-Semitic allies, general election voters may not be so forgiving.

Sanders’ embrace of Omar, Sarsour and others hasn’t appeared to hurt him with the Democratic base.

Then again, a 2018 Pew Research poll found that “the share of liberal Democrats who sympathize more with Israel than the Palestinians has declined from 33 percent to 19 percent since 2016.” And MTV News reports that young voters are in tune with the politics of Sanders/Corbyn.

So perhaps having Farakkahn fans campaigning for Sanders won’t be a problem in the primary.

But with polls indicating President Trump is making inroads with black and Hispanic voters, Democrats can’t afford to have another loyal constituency — Jewish voters — either turn to Trump or stay home in the general election.

Meanwhile, the question remains: Why is Bernie Sanders, an alleged social justice warrior, so comfortable with openly anti-Semitic activists like Sarsour and Omar on his team?

And, in turn, why aren’t more elected Democrats — including his 2020 opponents — adding their voices to the Jewish organizations raising this issue?