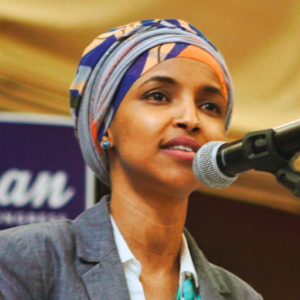 Just days after violent anti-Semitism claimed four innocent lives in yet another deadly attack, New Hampshire Democrats remain silent on Friday’s high-profile appearance in the Granite State by Rep. Ilhan Omar (D-Minn.) whose repeated anti-Semitic comments have been denounced even by members of her own party.

Omar will be in New Hampshire to keynote the NH Young Democrats’ Granite Slate Awards event, where she will be joined by other prominent Democrats like former Massachusetts Gov. Deval Patrick and 2020 candidate for governor, Senate Majority Leader Dan Feltes.  She will also attend campaign events with Sen, Bernie Sanders, who she has endorsed in the 2020 POTUS primary.

Not a single elected Democrat has spoken publicly in opposition to their party’s embrace of the Minnesota congressman, who has repeatedly used anti-Semitic tropes and appeared on stage with activists who support the destruction of Israel.

Others have spoken out, however.

“New Hampshire Democrats have really gone too far,” said GOP state Rep. Judy Aron (R-Sullivan 7), a Jewish member of the New Hampshire House of Representatives. “By bringing noted anti-Semite and opponent of Israel Rep. Ilhan Omar to New Hampshire, Democrats are showing how anti-Israel the modern Democrat base is.

New Hampshire Democrat candidates who want to be clear that they stand against anti-Semitism and support Israel should refuse funding from the New Hampshire Young Democrats and any organization that raises money off her appearance, and they should make it clear they do not support her visit to New Hampshire,” Aron said.

New Hampshire Democratic Party chair Ray Buckley responded to Aron’s statement by tweeting “Winner of ‘putting most lies in one release of the month’ award. Shameless. Disgraceful.”  He declined to name any specific lies or errors in her statement, however.

J’accuse Coalition for Justice is a think tank dedicated to combating anti-Semitism, anti-Zionism, and anti-Israel bias. Executive director Zach Schapira told NHJournal: “Given the critical role New Hampshire plays in shaping our presidential elections, Democratic primary voters have an obligation to hold Senator Bernie Sanders accountable for the people he associates with his campaign.

Now, in the immediate aftermath of the most recent antisemitic attack in Jersey City, it feels particularly insensitive for him to choose to appear alongside someone who has had a troubled history with anti-Semitism.”