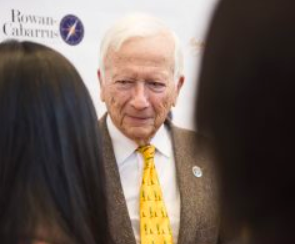 What do a number of prominent anti-forestry activists have in common with some of the most prolific “hate groups” in America?

According to a stunning new report, the same billionaire megadonor.

The recent bombshell story details how the Foundation for the Carolinas, with nearly $400 million in funding from billionaire Fred Stanback, funneled $20 million to anti-immigrant groups for years, including NumbersUSA, the Federation for American Immigration Reform (FAIR), and the Center for Immigration Studies (CIS), the latter two of which have been designated “hate groups” by the Southern Poverty Law Center. According to reports, these groups have advocated for the controversial program separating children from their parents when they cross the U.S.-Mexico border, among other anti-immigrant policies.

The immigration advocacy group America’s Voice has stated that the cash from Stanback is “fueling violence” and “undermining the fabric of American communities,” and demanded the foundation quit funding these groups.

An analysis of federal tax disclosures by the nonprofit Future Forests + Jobs shows that while Stanback has bankrolled these groups, he has concurrently donated more than $300 million to a constellation of environmental organizations engaged in a campaign against the renewable wood bioenergy industry, a technology my organization is committed to advancing as key to fighting climate change.

These groups include some household names, such as the Natural Resources Defense Council, Greenpeace, the Southern Environmental Legal Center, 350.org, the Partnership for Policy Integrity, and the Asheville, North Carolina-based Dogwood Alliance.

You might be thinking, why would a billionaire passionately support both anti-immigration and extreme environmental organizations? The answer lies in Stanback’s warped anti-human environmental ideology. Stanback holds the fringe Malthusian view that global population growth will destroy the environment, and that we must severely restrict immigration and enact population control measures in order to save the planet. This radical position has a long history among some extremists in the environmental movement, where leading figures have historically made common cause with some of the most racist elements in American society.

As Stanback’s concurrent donations to environmental and anti-immigrant groups show, this racist strain of the environmental left continues to this day.

To deepen the hypocrisy, these environmental groups often accuse bioenergy producers and the forest products industry of somehow violating environmental justice priorities by building facilities in rural communities that are struggling economically, and portray themselves as supporters of immigrants’ rights. Yet they hypocritically take money from the billionaire funding some of the nation’s most virulent anti-immigrant campaigns.

For instance, 350.org founder Bill McKibben was arrested just this year protesting the current administration’s immigration policies. It’s “time for people to stand up,” McKibben told the cameras, without mentioning that his own organization received $4 million just last year from the very billionaire funding anti-immigrant efforts.

The NRDC claims on its website that it “stands in solidarity with immigrant and refugee communities.” But it accepted more than $81 million from Stanback, who appears focused on targeting immigrants for deportation.

For the Southern Environmental Law Center, Stanback sits on the organization’s “President’s Council” and has given more than $175 million to the group.

One might think that after being confronted with this information — and given their criticism of others on social justice matters — these groups would be disturbed by their donor’s activities, and publicly commit to not taking any more of his money.

But when asked by the press about Stanback’s funding earlier this month, all but one of these groups declined to comment. The one who did, Dr. Mary Booth from the Massachusetts-based Partnership for Policy Integrity, which has taken $325,000 from Stanback in recent years, called the news “shocking,” but did not commit to stop taking his cash. Money talks.

The Natural Resources Defense Council, Greenpeace, the Southern Environmental Legal Center, 350.org, and the Dogwood Alliance owe answers. Why did they turn a blind eye to the racist beliefs of their billionaire benefactor? Will they stop taking Stanback’s money going forward?

Silence speaks volumes. It’s proof that these groups care more about their bank accounts than fighting for justice.

For organizations that claim to care about environmental justice and helping the world, such silence should be a death knell for their credibility.

Brian Rogers is spokesman for Future Forests + Jobs, an initiative sponsored by the wood energy industry. He wrote this for InsideSources.com.