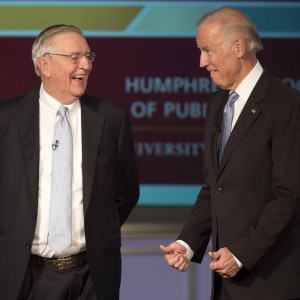 Appearing With a Fellow Vice President, Biden Sounds Like He Wants a Promotion

Vice President Joe Biden was on stage at George Washington University Tuesday morning to honor the life and legacy of one of his predecessors, Walter Mondale. But as Biden sat there with President Jimmy Carter’s second in command, reflecting on his own time in the Obama White House, he appeared to be doing something else: laying groundwork for the 2016 presidential bid he’s been mulling for months.

Throughout his remarks, Biden tied himself tightly to Obama, calling his decision to join the Democratic ticket in 2008 the best of his political career. “President Obama and I, ideologically, have had no disagreement,” he said at one point. Even when they ran against each other in the 2008 primaries, Biden said they “never disagreed on a substantive issue.”

Biden stressed that he’s been the president’s final adviser on all major issues and the administration’s lead liaison to Capitol Hill, where he previously served as a longtime senator from Delaware and chairman of the Foreign Relations Committee.

RELATED: 3 Quotes From “The Case for Joe Biden” — And What They Really Say About His 2016 Chances

Explicitly and implicitly, he also contrasted himself with former Secretary of State Hillary Clinton, the current Democratic presidential front-runner and the vice president’s chief competition if he runs. “We’ve had two great secretaries of state,” Biden said of Clinton and John Kerry. But he reminded the audience that he’s the one who formally speaks for Obama to world leaders.

Stressing the need for bipartisanship in Washington, Biden said, “I don’t think my chief enemy is the Republican Party” — a line that could been seen as a dig at Clinton, who recently described Republicans as enemies she’s proud to have made.

Perhaps attempting to take a controversial foreign policy issue off the table, Biden disputed claims that he opposed the Osama bid Laden raid while Clinton supported the mission. He then took a page from Clinton’s playbook in stressing the massive number of miles he’s traveled while working on world affairs.

Biden even addressed a potential liability he’d face as a candidate: his reputation for candor and verbal gaffes. “No one doubts I mean what I say. Sometimes I say all that I mean,” he said.

That “brand,” as the vice president called it, was on full display when Biden talked about his immediate predecessor, a Republican who’s long been a boogeyman to liberals.

“I actually like Dick Cheney,” he said. “For real. I get on with him. I think he’s a decent man.”

It was at this point that Mondale voiced some gentle disagreement, arguing that Cheney had brought the vice presidency over to “the dark side” when his office didn’t respond to subpoenas and avoided Congress. (Biden then appeared to walk back his earlier statements a bit, stressing his “harsh disagreement” with Cheney’s policies.)

If nothing else, Tuesday morning was a show of strength from perhaps the one Democrat with the power to really shake up the 2016 campaign. Mondale said Biden has “taken the vice presidency a big step forward.” We’ll soon see whether he’s taking another big step.