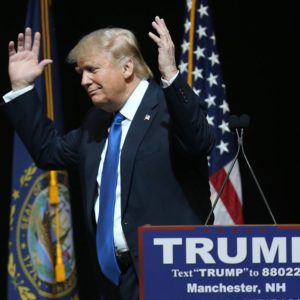 Are Trump’s Poll Numbers in New Hampshire ‘Too Bad to Be True?’

Morning Consult, which releases state-by-state survey data on Donald Trump’s approval every month, has released its September numbers and, yet again, the president’s New Hampshire polls are bad.

No, that’s not fair. They’re awful. 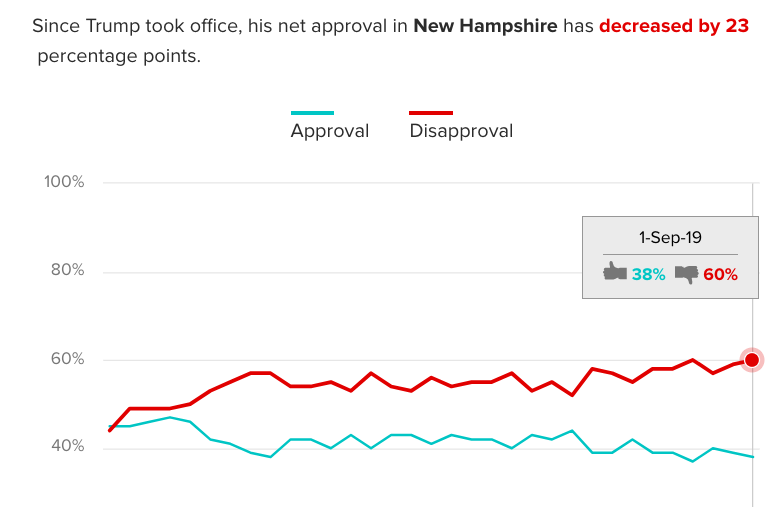 Trump is underwater by a massive -22 percent in the September polling, at 38 percent approve, 60 percent disapprove. To put that in perspective, of all the states on the “battleground” list, from Maine to New Mexico, Trump’s numbers in New Hampshire are the worst.

And it’s not a short-term trend or impeachment-inspired setback, either. In the Morning Consult surveys, Trump’s New Hampshire average for all of 2019 has been 39 percent approve, 58 percent disapprove.

After NHJournal tweeted out the new numbers out, it prompted this reaction from Greg Moore at AFP-NH:

Setting aside his unkind comments regarding UNH polling (an opinion widely shared among NH political professionals, by the way), Moore raises an interesting argument: These Morning Consult numbers are so bad–could they be “too bad to be true?”

First, we found the most recent Trump approve/disapprove New Hampshire polls from other sources. Since most of the polling at the moment is targeting Democratic primary voters (for obvious reasons) and not the general electorate, there aren’t a lot of numbers to work with.

But there are some. Emerson Polling put Trump’s September number at 40 percent approve, 53 disapprove. Not as bad as Morning Consult’s 60-38, but not great, either.

And then there’s the aforementioned UNH Granite State Survey from early August, with Trump at 42 percent approve, 53 percent disapprove. Morning Consult’s August number: 39-59. Once again, the Morning Consult number is uglier, with a significant difference in the “disapprove” percentage. Still, not good news for Trump.

NHJournal hasn’t polled Trump’s approval since January, but when we did, we found 36 percent approve, 58 disapprove. Morning Consult’s number that month: 39 – 58 percent. Pretty close, and it tends to confirm the longterm (and lousy) trend for President Trump in New Hampshire.

Conclusion: It’s a small sample, but one can legitimately argue that Morning Consult’s New Hampshire results tend to be worse for Trump than other polls. But not by much.

Certainly not enough to change the outlook of the 2020 election. If you’re a Trump supporter looking at -13 percent as the good news, it’s time to re-evaluate your terms.  (And if you’re one of the Republicans insisting that the polls are all wrong and should be ignored, you need to do your homework.)

It’s also time to ask–again–why Team Trump continues to put New Hampshire on its target list? As GOP consultant Alex Conant told NHJournal, “People are looking at the 2020 electoral map all wrong. Trump doesn’t have to win Wisconsin, Michigan, and Pennsylvania. He just has to win Wisconsin or Michigan or Pennsylvania. If he holds the other states and wins just one of those three–he gets re-elected.”

Of course Trump can win the White House without New Hampshire. He did it just three years ago. So did George W. Bush in 2004.  Poor poll numbers for the president in the Granite State are hardly a sign of doom for the White House in 2020.

But for the NH Republican Party? That’s another story.