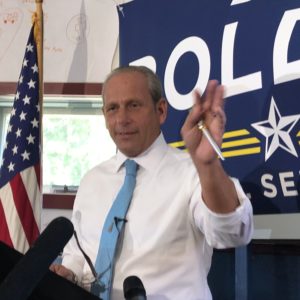 Bolduc waves to his granddaughter sitting in the front row at the VFW in Concord.
[IS] Opinions

BOLDUC: Hanson is Future of NHGOP, Will Bring Needed Change

Posted to Politics February 03, 2021 by NHJOpinion

“As much as I respect and admire Don Bolduc for his service and sacrifice, I can’t make sense of this decision.  Steve Stepanek helped to deliver a Republican majority in Concord in a very difficult election cycle.”  Josh McElveen in NHJournal

To clear up the question of my decision to support Keith Hanson, the answer is quite simple.  I focused on the future of the Republican Party and how best for it to grow.  I have always spoken to the truth just as I am doing now, I understand oftentimes the truth makes others uncomfortable.  It is not easy to stand alone; I get it.  It should not surprise anyone that I, like all Granite State Republicans, would be advocating for positive change in the New Hampshire Republican Party; to strengthen it.  Others can pretend all is well, but we need new leadership that looks to the future.  We need to bring in a fresh perspective.  We need change to grow, and Keith will bring the right change.

While on vacation last weekend, I exercised my right as a state committee member and endorsed a candidate.  My intention was not to take on the establishment, nor to further divide the party.  This is a process.  It is designed to get people to think, to consider, and to make a choice.  Keith reached out to me, to ask for my personal support in endorsing him, and after careful consideration, I agreed.

No one vilified Bill O’Brien’s nomination of Jennifer Horn.

No one vilified Bill O’Brien’s nomination of Steve Stepanek in 2019 and 2021.

No one vilified Senator Ruth Ward’s 2019 endorsement of Keith Hanson.

No one vilified Eli Clemmer’s nomination of Keith Hanson.

No one vilified Governor Sununu’s endorsement of Steve Dupree.

No one vilified Cory Lewandowski’s endorsement of Steve Dupree.

No one vilified Governor Sununu’s endorsement of Steve Stepanek.

Likewise, I should have the right to endorse and support Keith Hanson without retribution.  This is all part of the normal course of elections and politics; we choose the candidates we support, then we come together to champion whoever wins.  I have always encouraged party cooperation and delivered the unification speech at the Unity Breakfast on September 9th, 2020 to bring us together for healing while heading into the 2020 general election.

Our lack of genuine party unity is what has held us back.  We do not have an organization that includes everybody, listens to everybody, respects everybody, and we desperately need that in our leadership.  I believe Keith Hanson will bring us this unity by championing all voices of the New Hampshire Republican Party.

He has taken the time to sit down with me and earn my support.  No one is perfect, we all have flaws, but he firmly believes in growing the party and preparing for the future.  He will work hard to see the party adapt to a modern age and become stronger than before. He has done nothing for me to question his character and integrity.  The truth is what we need.  I would rather make someone cry with the truth than smile with a lie.

Don Bolduc is a retired Brigadier General, Republican candidate for United States Senate, and a member of the New Hampshire Republican State Committee