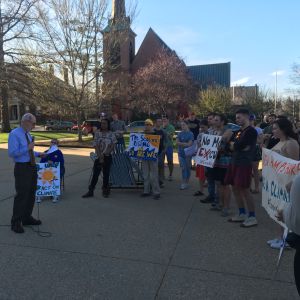 As Climate Activists Rally in New Hampshire, Questions Swirl Over Conspiracy Against Exxon

A coalition of environmental groups seeking prosecution of ExxonMobil took their national campaign to New Hampshire on Thursday, even as serious questions begin to arise about the propriety of the tactics and goals that the groups are employing as they become increasingly brazen.

The groups gathered before the statehouse demanding that Attorney General Joseph Foster launch an investigation into the energy company for allegedly discovering climate change decades ago and then hiding it from the public, a position that critics have dismissed as absurd because the science of climate change has been evolving during those years.

The groups holding the rally include 350 New Hampshire, an offshoot of the national group started by activist Bill McKibben, and NextGen Climate New Hampshire, founded by billionaire Tom Steyer, who has spent a fortune working to elect Democrats and halt energy projects nationwide.

The climate organizations have settled on a strategy of trying to enlist attorneys general across the country to open cases against the energy giant hoping that their collective efforts will do to the company what it did to Big Tobacco in the 1990s, with successful prosecutions across the country on a range of charges. But the efforts of these groups have already come under harsh scrutiny and criticism amid revelations that they have been secretly plotting behind closed doors to go beyond merely championing environmental causes and instead try to destroy ExxonMobil itself.

Earlier this month, the Wall Street Journal and Washington Free Beacon reported that top climate activists, union leaders, political operatives, and trial lawyers met behind closed doors at the Rockefeller Family Fund in Manhattan in order to plan out a far-reaching campaign to essentially dismantle ExxonMobil. 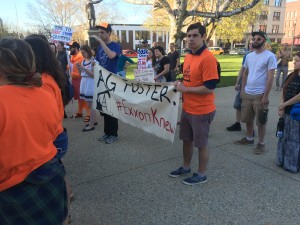 A copy of the agenda showed that among the ferocity of group’s objectives, which the company has termed a conspiracy, include “creating scandal” through actions by state attorneys general to obtain internal documents from ExxonMobil.  The memo specifically stated its goals to “delegitimize [ExxonMobil] as a political actor,” “force officials to disassociate themselves from Exxon,” and “drive divestment from Exxon.”

In addition, emails surfaced that at least one member of the group, Matt Pawa, a lawyer listed on the January agenda who has battled with the company, briefed attorneys general on litigation strategies during a conference being held in New York last month with former Vice President Al Gore and the attorneys general of several states. The emails also showed a top lieutenant to New York Attorney General Eric Schneiderman tried to keep secret the briefing with the attorneys general when the Wall Street Journal made inquiries about it.

The campaign by climate activists, along with apparent coordination with attorneys general, has been sharply questioned by the New York Post editorial page, writing: “[T]he anti-Exxon campaign is starting to look like a conspiracy in its own right — pursuing a purely political vendetta in a blatant abuse of office.” They add: “[M]aybe they’re the ones who should be investigated.” An editorial from Bloomberg View has called the actions by the attorneys general “preposterous” and “a dangerous arrogation of power.”

The New York Times has also reported on a major flaw in the case by the attorneys general and activists: “The history at ExxonMobil appears to differ [from that of Big Tobacco], in that the company published extensive research over decades that largely lined up with mainstream climatology.” The Times goes on to point out that ExxonMobil made disclosures to investors about the risks of climate change, and the company supports passage of a tax on carbon to decrease fossil fuel consumption. 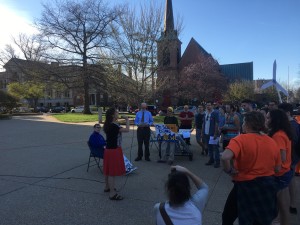 At the rally Thursday, in front of a crowd of a few dozen, speakers pushed for Foster to join other Democratic attorneys general in the investigation.

“Attorney General Foster, we call on you to not be on the wrong side of history and investigate Exxon for defrauding the very people you are supposed to protect,” said Craig Cavanaugh, a student at Manchester Community College and an environmental activist. “There should be no debate about this.”

State Senator David Watters, a strong supporter of environmental initiatives, focused on his belief that Foster will sign on to the investigation into ExxonMobil. “I think we have a strong ally in Attorney General Joe Foster,” he said. “And let me tell you, when Joe sues, Joe wins.”

Watters noted that it would be an uphill fight, but predicted that there will be more action to come against the oil company. “I think a hard sword of justice is going to fall on ExxonMobil.”

In one way the rally proved to be a family business. Becky Wasserman, the head of NextGen Climate New Hampshire, which sponsored the event, is the daughter of Lee Wasserman, the director of the Rockefeller Family Fund, which is at the center of the allegations over a possible conspiracy.

Foster’s office has said he is “looking into” joining other attorneys general in the investigation. A request for comment was unreturned by Foster’s office on whether the attorney general is bothered by reports of collusion between climate activists and the attorneys general of other states. The office also did not respond on whether Foster has met with climate activists to discuss a potential investigation.