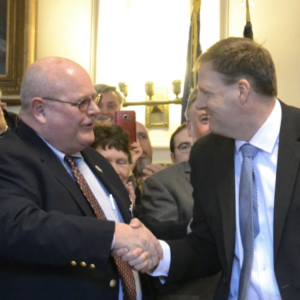 The day after New Hampshire Democrats announced a committee to conduct a political autopsy of their Election Day failures, the NHGOP House caucus was uniting behind Rep. Dick Hinch as their leader and all-but-certain speaker of the House.

Rep. Al Baldasaro withdrew his bid for speaker Wednesday morning. Despite some tough talk about Hinch earlier in the week, the Londonderry representative is urging his fellow Republicans to back Hinch.

“I have decided to keep the caucus unified by withdrawing my candidacy for Speaker of the House,” Rep. Baldasaro wrote to representatives-elect in a letter obtained by NHJournal. “We need to start from day one of our session as a united front against the Democrat’s agenda.”

“We must join forces as one TEAM — because Together Everyone Achieves More,” Baldasaro wrote.

With no GOP challengers on the horizon, Hinch is now essentially a lock for the Speaker’s chair. He’ll still need to be elected – twice. Next week, the Republicans will meet in caucus to officially pick him as the GOP leader. On December 2, Organization Day, the House will vote to seal the deal and hand him the gavel.

“I thank [Rep. Baldasaro] for exploring a run for speaker and keeping me honest,” Hinch tells NHJournal. “Competition makes us stronger.”

“We both recognize that as the incoming majority, we have no time to waste in demonstrating leadership and unity,” Hinch says, adding that bringing the caucus together has been his main mission in the last two years. “Al was a valuable member of our leadership team and participated in that mission as well.”

“It is very important that we all show up on December 2, as the House Majority to ensure we are victorious in electing Dick Hinch as our Speaker,” Baldasaro wrote.

Baldasaro, an outspoken advocate of the Trump brand of populist GOP politics, says he has no plans to change.

“I have been a loud voice for my seven terms, and I don’t plan on stopping. I will continue to be involved with all my fellow Republicans,” he wrote, emphasizing he’ll be especially outspoken “in support of our Platform and Constitution.”

Meanwhile, Democrats are already divided over the prospect of Chairman Ray Buckley’s hand-picked commission to review their poor 2020 performance. While Democrats dominated the federal races, they still managed to lose the Executive Council, the state Senate and the House of Representatives.

After the news of the Buckley Commission hit, progressive Democrat and Executive Councilor Andru Volinsky tweeted: “Is this for real? Who was consulted? What info will be made available? How were members chosen?”

Notably absent from the Buckley Commission are Sens. Jeanne Shaheen and Maggie Hassan and Reps. Annie Kuster and Chris Pappas.

“Are you kidding,” one longtime Democratic activist told NHJournal. “Jeanne doesn’t want to be anywhere near this [expletive].”

Journalist James Pindell, former publisher of the New Hampshire Political Report, tweeted, “Read this as anything other than Buckley’s reelection campaign & you are doing it wrong.”

A source close to Volinsky’s failed gubernatorial primary agrees. “This is a joke to cover Ray’s ass and avoid accountability for the state party’s failure.”