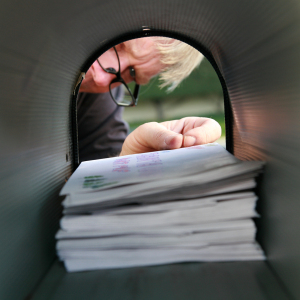 USPS has lost $26 billion over the past three years, and the rate of loss has grown on some of its monopoly mail services. New cuts enacted Monday eliminate overnight first-class mail delivery, and other recent changes include eliminating processing plants and delivery routes.

The annual compliance report shows that the rate of loss on standard mail has increased. The price of Standard Mail Flats now only covers 81.6 percent of costs. Standard Mail Parcels and Periodicals only cover 66.3 percent and 76.1 percent, respectively.

Volume declines for standard mail have mostly stabilized. Oddly though, the USPS raised rates last year by 5.9 percent, far ahead of inflation, but losses have grown anyway.

Furthering concerns of financial mismanagement, the USPS is providing discounts to customers that sort their own mail that are greater than the cost to the USPS of sorting that mail internally.

The USPS has stated that three of four customer groups have had decreasing satisfaction with USPS service versus the previous year. With prices rising and customer satisfaction worsening, critics question how money is being spent and whether additional revenue is subsidizing other services.

“This latest compliance report confirms the fears of many taxpayers that the Postal Service continues to hemorrhage money and pursue a failed business model,” said David Williams, President of the Taxpayer Protection Alliance. Williams tells InsideSources that “the biggest obstacle for the Postal Service is their inability to remain focused on their core mission of delivering mail.  Tinkering around the edges of reform or competing with the private sector for grocery delivery won’t make the Postal Service solvent.  Real reform that includes shuttering unneeded facilities and going to delivering mail five days a week is what is needed.  If a government-sponsored monopoly like the Postal Service can’t make money, there are serious problems with management.”

But this view faces fervent opposition from the American Postal Workers Union (APWU). Mark Dimondstein, President of APWU, says it’s time to “enhance and expand service. There is great potential. The USPS is uniquely positioned to serve the booming market for package delivery created by the ecommerce revolution. And the Postal Service, which already processes more money orders than any other institution, should expand its array of financial services.”

What needs to be done? All sides seem to acknowledge a need for Congress to act, but there is disagreement over the potential reforms.

Both the USPS and the postal union want Congress to end the requirement that the post office prefund its retiree health benefits program. USPS has defaulted on its past four payments, which are supposed to be over $5 billion per year. But some members of Congress worry that removing this requirement leaves taxpayers on the hook for covering these costs.

The Postmaster General, who will step down February 1, has faced strong union opposition to cost cutting plans, such as ending Saturday mail delivery. “What’s holding us up? Myopia…shortsightedness.” explained Donahoe in a speech earlier this week. “Our labor unions view the future of the organization mostly through the lens of preserving jobs and benefits as they currently exist,” said Donahoe.

“The time has run out for the Postal Service to be trusted to make the changes.  It is now time for Congress to step in and force the much-needed reforms,” stated tax advocate Williams, who worries the Postal service will be headed for a taxpayer bailout without decisive action.

It’s unclear whether the new Republican Congress will move on legislation as other issues distract from needed reforms.

One potential step in the right direction could be President Obama’s nomination of Robert Taub to chair the Postal Regulatory Commission (PRC), which oversees USPS. InsideSources reported in October that now-retired Sen. Tom Coburn (R-OK) was calling for the previous chair, Ruth Goldway, to be replaced after continued questions of her overseas travel. Taub, who is now Acting Chair, issued a memo to staff banning all travel. Other reforms are expected.

But as losses at USPS continue, the cost of Congressional inaction will rise as an agency older than the country itself struggles to keep pace in the 21st Century.