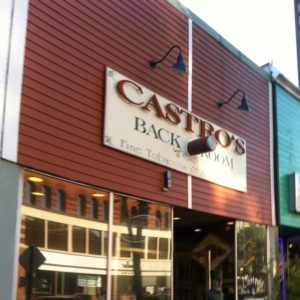 At Castro’s Cigars, The Coronavirus Debate NH Pols Don’t Want to Have

Within hours of Gov. Chris Sununu’s announcement that he was ordering private businesses to stop serving food and drinks in response to the coronavirus outbreak, Granite Staters from across the political spectrum were engaged in passionate debate over the proper balance between protecting public safety and overreaching government power. Only these weren’t elected representatives or political leaders.  They were patrons of Castro’s Cigars on Elm Street in Manchester Monday night.

“I’m a grown man. I don’t need Sununu to tell me what to do,” said Ty, who came to the popular Manchester establishment to celebrate his birthday.

“We have to do something, there’s too much at stake,” was Chantelle Pelletier’s take, who rolled out an impressive list of reported details about the spread of the virus and its potential impacts off the top of her head.

It was exactly the sort of debate an edict like Sununu’s would be expected to inspire among legislators, local officials and civil libertarians of New Hampshire. But they have been oddly silent. In a state where lawmakers literally go to the highest court to defend their right to carry a handgun on the statehouse floor, there’s been almost no pushback against the governor’s unilateral decision to overrule local control of public schools, or put thousands of Granite Staters out of work with the stroke of a pen.

Given the virus’ potential impact, the governor’s decision may be entirely necessary. And nobody disputes that he has these emergency powers under the law. But in some states, it’s at least a matter of public debate.  In Georgia, for example, the GOP-controlled legislature convened Monday to wrangle over much power Republican Gov. Brian Kemp should have to declare a state of emergency and whether the legislature should have to re-authorize his declaration after a month.

Not in New Hampshire. Instead, a group of Castro’s regulars showed up as the clock ticked down to get in one last drink and cigar before the state made it illegal.

Opinions ranged from “Live Free or Die” libertarianism to begrudging acceptance of draconian action in a moment of crisis. “Whatever the governor decides, we’ll roll with it,” Pelletier, who tends bar at Castro’s, told NHJournal.

Her customers weren’t so sanguine. “I was in the middle of a project at work when I heard the news and decided I wanted to have one more cigar before it was too late,” said Mark Adamson of Manchester. “I’m not going to say this is a knee-jerk reaction, but I think [shutting down all restaurants and bars] is a reaction without a plan. It’s going to have a dramatic impact on the economy, and I just wonder if they couldn’t come up with a better move if they’d taken a little more time.”

Several patrons pointed out how few coronavirus cases there are in New Hampshire compared to Massachusetts and elsewhere, speculating that Sununu’s decision was based more on pressure from frightened parents to copy other states rather than actual conditions on the ground. It’s a sentiment Sununu appeared to confirm.

“Knowing neighboring states have closed restaurants and bars has caused New Hampshire to evaluate those states’ actions and their impact on New Hampshire’s population risk profile,” Sununu said in a statement

Is this an overreach by the governor? Should the legislature play any role in checking and balancing executive power? All these ideas were debated at the bar–but have barely been heard from elected leaders. None of the New Hampshire Republicans contacted by NHJournal were willing to go on the record.

The ACLU of New Hampshire has launched a program they call “ACLU Voter 2020 – a New Hampshire campaign to put civil rights front and center in this year’s election for governor.” No mention of Sununu’s decision, its impact on fundamental property rights or individual liberty, etc.

Even the most adamant opponents of Sununu’s order acknowledged that the coronavirus threat is real and requires action. And a few, like Steven from Manchester, took the news in stride.

“I look forward to seeing how capitalism finds a way around this latest government restriction.”