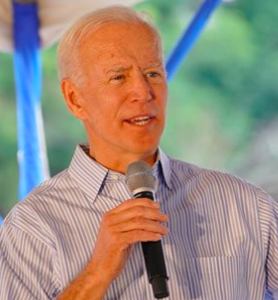 For Joe Biden, immigration policy may be a lose-lose proposition.

At a campaign event in Dover, N.H. last Friday, the former vice president was surrounded by hostile immigration activists waving signs like “End all deportations on Day 1,” and “We haven’t forgotten 3 million deportations.”

“Will you commit to ending all deportations when you become president?” one of them demanded.

“No,” Biden answered, inspiring a chant from the no-deportations advocates of “Three million deportations, under the Obama administration!”

The protesters also wanted Biden to “apologize to the three million immigrants that were deported and separated from their families under the Obama years.”

“I will not apologize for the deportation of people who have committed a felony,” he answered. “I will apologize for deportations if in fact you were deported because you were engaged in a misdemeanor… or your family was separated.”

It was an ugly moment for Biden on the campaign trail: being shouted down by people of color, accused of supporting xenophobic policies and outted as being on the wrong side of the immigration issue among progressive voters.

On the other hand, some analysts believe that, while it may hurt in the short term, the immigration issue could help Biden in the long war for the nomination. How? By highlighting his standing as the most electable Democrat in the race.

Many of the statements and proposals on illegal immigration from his 2020 competitors are outside the mainstream of American politics. In some cases–like taxpayer-funded healthcare plans for illegals–far outside.

“I think there has to be some moderation,” Domingo Garcia, president of the League of United Latin American Citizens (LULAC), said of the Democrats’ ever-more aggressive stance on illegal immigration. “I disagree with the candidates’ positions about providing health care to undocumented immigrants, when you have Americans who don’t have health care,” he told the Washington Post.

Garcia may be on to something. While Americans overwhelmingly agree that legal immigration is a good thing, Gallup polling has found for decades that most Americans want to either keep current levels or lower them. And a new Scott Rasmussen poll found 77 percent of Americans said illegal immigration is bad for America.

So when Joe Biden refuses to pledge an end to all deportations, he’s on the side of a majority of voters. The question is whether that’s true among Democratic primary voters.

“Immigration is definitely hurting Joe Biden in our community,” Eva Castillo, director of the New Hampshire Alliance for Immigrants and Refugees, told InsideSources. “During the Obama years, they had the wrong policy. They deported too many people and hurt too many families.”

Castillo says all deportations should end, all asylum seekers should be allowed to enter the U.S. immediately and all illegal immigrants in the country now should have amnesty. This may sound extreme, but there are a significant number of progressives who do support open borders.

In a January 2018 Harvard-Harris poll, 21 percent of Americans said they supported “basically open borders” over “secure borders.” Earlier this month, an identical 21 percent told pollster Scott Rasmussen “the United States has no right to decide who is eligible to enter the country. They believe anyone who wants to live in the United States should be allowed entry.”

Why should the views of just one-in-five voters matter? Because these people are overwhelmingly Democrats.  They make up a third of the Democratic electorate and about half of self-described liberals.

The 2020 Democratic field has figured this out. Sen. Kamala Harris, a former prosecutor who some Democrats view as one of the more moderate candidates, said in the first Democratic debate that people should “absolutely not” be deported for coming to the U.S. illegally. Most of the other 2020 candidates agree.

Sen. Elizabeth Warren has released a new immigration plan that’s so radical–it would virtually end all deportations, except for dangerous felons– that it inspired Kevin Drum of the far-Left magazine Mother Jones to ask: “Are Democrats Now the Party of Open Borders?”

“I have previously criticized Republicans who accused liberals of wanting ‘open borders,’” Drum writes. “But I have to admit that it’s hard to see much daylight between Warren’s plan and de facto open borders.”

Seriously, ask yourself: is that your position? Most Americans say no.”

“He’s right,” Jessica Vaughan of the Center for Immigration Studies told InsideSources. “When it comes to immigration, most Americans are compassionate about people like the Dreamers, but they want border security, too.”

Which is why Biden’s latest position on immigration makes so little political sense.  As recently as the Democratic debates, Biden was giving careful answers about border enforcement. When he was asked whether a person should be deported “who is here without documents, and that is his only offense,” Biden replied: “That person should not be the focus of deportation.” [Emphasis added] Plenty of wiggle room.

But in New Hampshire on Friday, Biden said that only felons should be deported, while people merely guilty of misdemeanors (which is the vast majority of illegal immigrants) would be allowed to stay.  In other words, Biden’s position is essentially identical to Sens. Warren and Harris.

“Biden wants to have his cake and eat it too on immigration,” Vaughan said. “He understands that most Americans want border security. But at the same time, Biden doesn’t want to offend key constituencies in the Democratic Party.”

Which is why immigration may be one fight Joe Biden just can’t win.