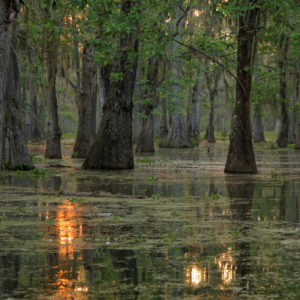 In North Dakota, the Army Corps of Engineers is poised to grant the final easement to construct the Dakota Access Pipeline. Heavy equipment is clearing away the camp itself. For the most dedicated protesters, however, the fight isn’t over–it just moved further south. The Bayou Bridge pipeline in southern Louisiana will run 163 miles. Some consider it the tail end of the Dakota Access Pipeline, since it would be used to carry fracked oil to refining plants and export terminals.

Phase one of the Bayou Bridge pipeline opened in April 2016 and connected Nederland, Texas to refineries in Lake Charles, Louisiana. The second phase of the project, planned to be in operation by the end of 2017, would run 162 miles from Lake Charles to refineries in St. James. In the process, it would pass over thousands of small streams and run through numerous wetlands. Protesters argue that a pipeline spill in these areas would damage the fragile environment of the bayous.

On Wednesday, the Louisiana Department of Natural Resources will host a public hearing concerning a permit for a 17-mile stretch of pipeline. Already, both sides are anticipating a heated meeting.

“I expect we will have a bigger turnout, because people are fired up,” said Anne Rolfes, director of the Louisiana Bucket Brigade, an environmental group. “This opposition is really unprecedented.”

Rolfes vowed that the pipeline would continue to meet resistance. Her group is one of many seeking to stop the approval and construction of the pipeline.

In January, Atchafalaya Basinkeeper, a group committed to protecting the Atchafalaya Basin in southern Louisiana, gathered more than 100,000 signatures to force the Army Corps of Engineers to conduct an environmental impact survey of the project. (One section of the Bayou Bridge project requires a Corps permit.) The Corps hosted a public hearing about the permit and decided to grant it.

Another group, Bold Louisiana, which has been connected to the DAPL protests in North Dakota, opposes the pipeline out of concerns about environmental impact and abuse of eminent domain. Funding for the group has been tied to billionaire political activists George Soros and Tom Steyer.

Unlike the DAPL protests, there is, so far, no protest camp trying to stop construction. The protests also lack the native rights angle that formed the core of the North Dakota resistance. Instead, the several groups protesting the project say they are working to preserve the Cajun way of life, which relies heavily on the swamps and bayous.

Locally, the project has been contentious for reasons beyond merely spills. Supporters of the pipeline have boasted of the 2,500 jobs it would add to the area economy. Opponents point out that most of those are temporary construction positions and that the pipeline’s permit anticipates adding only 12 permanent positions.

There are also concerns about the impact of construction. Several different pipelines already cut through the area, and residents are all too familiar with pipeline companies that promised to restore the natural grading of the land, but didn’t. Crawfishermen have complained that pipeline construction leaves behind spoil banks of earth that prevent water from moving freely. The stagnant pools that result are inhospitable to crawfish.

Energy Transfer Partners has been meeting with local leaders to persuade them that it will do better. The company has promised that the pipeline will be completely buried, leaving behind no spoil banks. For some, the meetings seem to have worked.

“I’ve been in office for a dozen years, and this is the first time a pipeline company comes down and sits with us before the pipeline is built,” said St. Martin Parish President Guy Cormier, who met with the company.

“We are not against oil and gas companies,” Cormier continued. “We just want to make sure it’s done right. … I want to know exactly what they are going to put in the ground.”