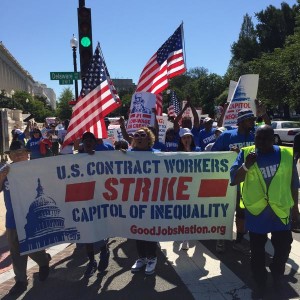 Workers rally at the Capitol Wednesday

“It is a national disgrace that millions of full-time workers are living in poverty and millions more are forced to work two or three jobs just to pay their bills,” the independent Vermont senator said. “The current federal minimum wage of $7.25 an hour is a starvation wage and must be raised to a living wage.”

As CNN reported, the rally — attended by many workers currently on strike over their wages — took place as Sanders and the Congressional Progressive Caucus prepared to “introduce legislation that calls on Congress to enact a $15 an hour national minimum wage, as well as calling on President Barack Obama to issue an executive order that would reward companies with federal contracts if they agree to pay their workers $15 an hour, as well as allow them to unionize.”

Such a move would affect many of the workers who attended Wednesday’s rally, which was organized by Good Jobs Nation, a campaign sponsored by the Change to Win labor coalition.

The campaign’s spokesman, Paco Fabian, told InsideSources that many workers at the rally struggle so much that they rely on some form of public assistance to make ends meet.

“They are workers in the Senate office buildings who are a paycheck or two away from homelessness,” he said. “In richest country in the world, and working where they work — the U.S. Capitol — that’s unacceptable.”

It’s particularly unacceptable given the rising cost of living in the District, according to Del. Eleanor Holmes Norton, D-D.C.

“Everything has been going up except what the boss pays you,” she told the rally.

Wednesday’s rally came as part of minimum wage activism in Washington, D.C., and across the country.

Sontia Bailey — a Capitol cafe cashier who shared the stage with Sanders — had published an opinion piece in the Guardian on Tuesday. She described how her low wages of $10.59 an hour led her to take a second job at Kentucky Fried Chicken.

“It may be hard to believe, but Colonel Sanders actually pays me more than Uncle Sam does,” Bailey wrote.

But working two jobs over the course of 70 hours each week had devastating consequences for the cashier: she had a miscarriage and then immediately needed to return to work to pay for her son’s funeral.

“If I made a living wage at the US Capitol, I would not have needed to get a second job and stretch myself to the breaking point,” she concluded. “If I just had one good-paying job, I would be a new mother today.”

Wednesday also saw a New York panel recommend that the minimum wage be raised to $15 an hour for fast-food employees across the Empire State.

“Chalk one up for the 99-percenters,” Bill Lipton, director of the Working Families Party in New York, told the New York Times. “There’s clearly a new standard for the minimum wage and it’s actually a living wage for the first time in many, many decades.”

In presidential politics, the “Fight for 15” has been embraced by Sanders and former Gov. Martin O’Malley, D-Md., while former Secretary of State Hillary Clinton has not voiced her support for $15 specifically.

Matthew Yglesias of Vox recently explained why that may be:

[W]hile it is easy to find left-of-center wonks and economists who favor minimum wage hikes and have generally positive things to say about the Fight for $15 campaign, it’s a little difficult to find one who’ll come out and say definitively that he or she thinks a $15-an-hour minimum wage is a good idea. … There’s a real fear that while a boost to $10.10 an hour wouldn’t do much, a hike to $15 is big enough to have significant negative effects.

Catherine Rampell of the Washington Post articulated this view in a piece on Monday, calling $15 an hour “a badly misguided idea” that would likely put many people out of work in low-cost parts of the country.