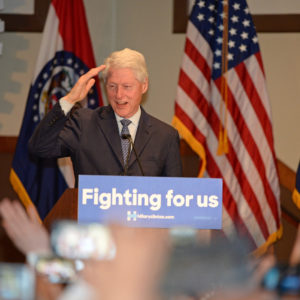 Bill Clinton Agreed with Ted Cruz On Keeping U.S. Control of the Internet

Former President Bill Clinton supported keeping U.S. oversight of the internet in 2014 after the Obama administration said it would hand it over to the international community, a move Republicans in Congress led by Ted Cruz may try to stop by leveraging an imminent government shutdown.

“A lot of people who have been trying to take this authority away from the United States wanted to do it for the sole purpose of cracking down on internet freedom, and limiting it and having governments protect their backsides instead of empower their people,” the 42nd president of the United States said during a Clinton Foundation event in 2014.

The remarks came less than two weeks after the Obama administration announced its intention to cede federal government oversight of the Internet Corporation for Assigned Names and Numbers (ICANN), the private organization that manages the crucial back-end functions of the internet Domain Name System (DNS), to a global multi-stakeholder community of nations, internet companies and technical organizations.

It was during Clinton’s presidency in 1998 that the current framework was established, charging the Commerce Department’s National Telecommunications and Information Administration (NTIA) with overseeing ICANN’s Internet Assigned Numbers Authority (IANA), which it uses to manage critical functions like assigning internet protocol addresses, overseeing top-level domain names like .com and .org and running the root servers that route web addresses to their correct source.

“I understand why the reaction in the rest of the world to the Edward Snowden declarations has given new energy to the idea that the United States should not be in nominal control of domain names on the internet, I understand that,” Clinton said. “But I also know that we’ve kept the internet free and open, and it’s a great tribute to the United States that we have done that, including the ability to bash the living daylights out of those of us who are in office or have been.”

At the time Clinton touched on the major concerns Republicans in Congress have expressed since — that the transition would be a venue for oppressive regimes with a reputation for online censorship within the borders, such as China and Russia, to try and exert control over global free speech and the free flow of information online.

Lawmakers have used appropriations riders to block the transition for the last two years, with Texas Republican Sen. Ted Cruz leading this year’s effort ahead of its planned completion on Oct. 1.

Though Democrats, administration officials and ICANN representatives themselves have pointed out ICANN has never had the mandate or authority to protect free speech online, Wikipedia co-founder Jimmy Wales, who sat on the same panel with Clinton in 2014 and has sat in on “high-level” discussions at ICANN, said the concerns were legitimate.

“Are you at all worried, Jimmy, that if we give up this domain jurisdiction we’ve had for all these years that we’ll lose internet freedom?” Clinton asked.

“Yeah, I’m very worried about it,” Wales replied, explaining his concern stems from the cultural influences other nations could exert over ICANN — a worry echoed by an FCC commissioner on Tuesday.

“There is the First Amendment in the U.S. and there is a culture around free expression that’s so strong, that it’s really important,” Wales said. “When I’m on a high-level panel at ICANN, one of the things that really concerns me is some of the other people on the panel [say] ‘it’s important we have respect for local cultures. Okay, I respect local cultures, but I’m not sure that means I think…the head of the telecom regulation unit in a particular country should be banning parts of Wikipedia.”

“That’s not local cultural variation that we should embrace and accept,” he continued, “that’s a human rights violation.”

“Now, going and and saying, ‘the U.S. will do a good job’ — people don’t believe that necessarily anymore,” he said, describing the handoff as a concession to the international community over the Snowden disclosures — a criticism many opposed to the transition have maintained since, especially given the lack of a technical correlation.

“I don’t know the way forward; internet governance is a very complicated issue, but it does concern me,” he added. “[It’s] really something the U.S. should be taking leadership on, and if, because of the embarrassing revelations we’re not able to take leadership anymore, I think the world is possibly a little worse off for that.”

Though proponents say the international transition has been planned all along, Clinton — who ordered the current framework be established in 1997, and whose administration oversaw the dawn of the modern internet — didn’t appear to support that narrative.

“Whatever you believe about what the NSA has done, what the president has proposed to change it, whatever — the internet has flourished in freedom and people have had access to it,” Clinton said. “I understand in theory why we would like to have a multi-stakeholder process, I favor that, I just know that a lot of these so-called multi-stakeholders are really governments that want to gag people and restrict access to the internet.”