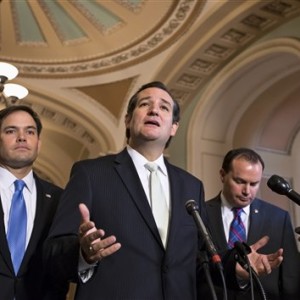 Texas Republican Sen. Ted Cruz suggested a Commerce Department employee could be subject to jail time Wednesday for using federal funds to advance what Republicans describe as the administration’s “handover” of oversight of the internet domain name system.

During a Judiciary subcommittee hearing Wednesday Cruz convened to examine the transition, set to take place Oct. 1, the Texas senator said Commerce Department employees including Larry Strickling, an assistant secretary in the department, may have violated federal law by using funds to work on facilitating the transition — activity Congress barred it from doing in an appropriations rider last year.

“These legal prohibitions have been passed into law by Congress and signed by the president,” Cruz told Strickling, a witness called to testify during Wednesday’s hearing. “If your superiors direct you to do it and you carry out those orders, under the Antideficiency Act you are risking personal criminal liability of up to two years in prison.”

While the rider blocked the transition from taking place, Strickling argued a previous rider from 2014 instructed the department to “conduct a thorough review and analysis” of the transition before it moves to “relinquish the responsibility” over the internet’s backbone functions, like assigning internet protocol addresses, overseeing domain names like .com and .org and acting as the roadmap guiding devices to websites.

“Senator we have followed the law,” Strickling replied heatedly. “We have not relinquished our responsibility. I am outraged that you are accusing us of doing that.”

Strickling said a similar rider in last year’s appropriations bill makes it “clear that Congress never intended ‘relinquish the responsibility’ to mean all of the preparatory activity we were engaged in, because we were directed specifically to conduct a review of the plan.”

The exchange came after Cruz read off a list meetings and expenses the department incurred while reviewing the transition, announced by the Obama administration in 2014 amid the fallout from the leak of widespread National Security Agency digital surveillance programs by former NSA contractor Edward Snowden.

After the leaks the international community put pressure on the U.S government and web companies, arguing they were a sign the U.S. has too much control over the internet. The unrelated from a technical standpoint, opponents assert the transition was announced as a concession, despite proponent claims it’s been planned since the 1990s.

Under the plan the National Telecommunications and Information Administration (NTIA), an agency within the Commerce Department, will relinquish oversight of the non-profit California-based Internet Corporation for Assigned Names and Numbers (ICANN) to a group of private global technology companies, which would hear proposals from a collection of governments including the U.S., Russia and China.

Republicans say countries with a poor record of online censorship shouldn’t be granted the same weight as the U.S. government, which is bound by the First Amendment, and expressed fear they would try to exert influence in the form of censorship online if the transition goes through.

“Imagine an internet run like many Middle Eastern countries that punish what they deem to be blasphemy. Or imagine an internet run like China or Russia that punish and incarcerate those who engage in political dissent,” Cruz said, also calling into question companies like Facebook and Google’s judgment with regard to upholding the First Amendment.

“When you posit that there is some First Amendment protection that exists today, when you talk about website owners, we’re not involved in that,” Strickling added.

Backers of the plan including Strickling and ICANN CEO Goran Marby, who testified alongside him, said the plan makes it so that no proposal can go through without the approval of the U.S., and said ICANN would continue to be based in California, and subject to state and federal law.

They added that to stall the plan now would hurt U.S. international credibility, and since compliance with the current system is voluntary, could lead to a fracturing of the World Wide Web with countries establishing their own versions of ICANN throughout the world, and closing off access into and out of the internet within their borders.

While Republicans have threatened to insert another rider blocking the transition in this year’s spending bill, the Government Accountability Office said Tuesday that the transition doesn’t incorporate a transfer of property, since ICANN is already a private entity, and therefore doesn’t require congressional approval. The interpretation could let Commerce use any untapped funds to complete the transition.