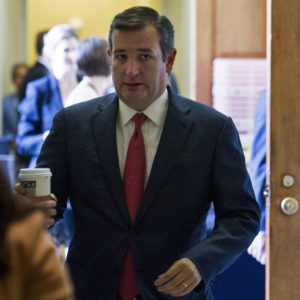 Senator Ted Cruz’s crusade to stop the Obama administration from transferring oversight of the internet’s back-end functions to the international community could put the brakes on a spending bill necessary to continue funding the government after September.

After almost a half-dozen delays senators finally cleared a procedural vote Tuesday evening to consider a continuing resolution to fund the government into December, after lawmakers get back from campaigning for reelection. Cruz — widely credited by Republicans and Democrats with the 2013 government shutdown — was one of the few to vote against Tuesday’s motion to proceed.

That doesn’t mean the Texas Republican is alone. Influential Republicans including Sens. Chuck Grassley of Iowa, John Thune of South Dakota, Ron Johnson of Wisconsin and Mike Lee of Utah have all expressed support for the rider championed by Cruz to block, at least temporarily, the Commerce Department from giving up oversight of the Internet Corporation for Assigned Names and Numbers.

ICANN manages the internet’s backbone functions, like assigning internet protocol addresses, overseeing domain names like .com and .org and running the root servers that route web addresses to their correct source. The Obama administration announced in 2014 it would cede oversight of ICANN to a private international multi-stakeholder group, but the effort has been delayed over concerns countries like China and Russia would use the opportunity to exert control over the World Wide Web, limiting free speech and the flow of undesirable information.

While lawmakers had hoped to leave town at the end of the week, negotiations over what they’ll tack onto the CR — including the rider  — will almost certainly take them into next week, Republican Senate Majority Leader Mitch McConnell said Tuesday.

Cruz convened a congressional hearing to discuss the transition last week, where he grilled ICANN CEO Goran Marby on the non-profit’s future plans to function free of federal oversight, and threatened a Commerce Department official charged with overseeing the transition with possible jail time for disregarding a similar rider placed in last year’s omnibus spending bill.

Tim Berners-Lee, the MIT professor widely credited with inventing the World Wide Web in 1989, accused Cruz of fundamentally misunderstanding the issue and what ICANN can do and does in a Washington Post op-ed Tuesday. Berners-Lee and former White House deputy chief technology officer Daniel Weitzner said ICANN has never ensured free speech online and doesn’t have the authority to do so.

“But the misguided call for the United States to exert unilateral control over ICANN does nothing to advance free speech because ICANN, in fact, has no power whatsoever over individual speech online,” the two wrote. “ICANN…supervises domain names on the Internet. The actual flow of traffic, and therefore speech, is up to individual network and platform operators.”

Berners-Lee and Weitzner echoed statements made by other proponents, pointing out the current system is maintained by global voluntary compliance with technical standards ICANN put in place, which other countries could choose to ignore in favor of establishing their own networks if the U.S. goes back on its word.

Oppressive regimes like Russia and China maintain internet censorship with network firewalls at their borders and by enforcing laws on web services within those borders. Witnesses during last week’s hearing said any attempt by those countries to exert pressure over ICANN on an international basis would be blocked by the U.S., since all countries have to agree on a proposal before it can even be submitted to the group of businesses and technical organizations that would directly oversee ICANN under the plan.

While the why behind Cruz’s opposition to the transfer may be misguided, he’s put his finger on an important issue, according to David Dayen in a Tuesday opinion piece for The Fiscal Times. Dayen said it’s oversight of how ICANN contracts out the registries for top-level domain names to private companies that will suffer. One such company, VeriSign, operates the most profitable .com registry (among others) and has a contract with ICANN to automatically renew every six years simply by meeting certain performance metrics.

Until recently ICANN let VeriSign raise the price of a .com registration by 10 percent every year to a recently capped $7.85, netting it a 60 percent profit margin last year. The company has reached an unfinalized agreement with ICANN to renew its contract two years early as part of the transition.

“As more people buy .com addresses and the expenses that go into managing them drop, this little company selling a regulated product is one of the most profitable in the entire world,” Dayen wrote. “And these contracts are incredibly lucrative for everyone involved” including ICANN, which “has enjoyed revenues of nearly $600 million in the last three years, with one of the highest-paid executive teams in the non-profit world.”

The non-profit held a recent auction for the .web domain name, won with a $135 million bid by Nu Dot Com — a shell company wholly owned by VeriSign.

“These all seem like things that the chief regulator for ICANN would want to examine,” Dayen wrote. “But after Sept. 30, that regulator would be dispersed among multiple stakeholders. The proper dictum here is that if everybody has responsibility, then nobody does. So if the government gives up ICANN oversight, there will be less opportunity to critically scrutinize how ICANN operates, and whether it’s ripping off the public in mutually beneficial deals with monopolistic corporations.”

Cruz and Lee sent a letter to the Justice Department in August asking for a competition review of ICANN’s contract with VeriSign.

It its response DOJ said the National Telecommunications and Information Administration (NTIA), the agency within the Commerce Department that oversees ICANN, OK’d the 2012 contract renewal (the next renewal originally wasn’t due until 2018) after VeriSign agreed to the price cap. DOJ said it will continue to work with NTIA to oversee contracts through the privatization transition, but did not say whether it will heed lawmakers advice and open a review.