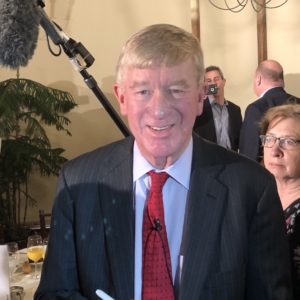 Former Massachusetts Governor William Weld told a politically-savvy New Hampshire audience that he is forming an exploratory committee to challenge President Trump in the 2020 GOP primary to rescue the party from “Stockholm Syndrome.”

“Our President is simply too unstable to carry out the duties of the highest executive office,” Weld told the Politics and Eggs breakfast in Bedford, NH—a must-stop on the presidential campaign trail through the Granite State. “They say the President has captured the Republican party in Washington. As the president might say: ‘Sad.’ But even sadder is that many Republicans exhibit all the symptoms of Stockholm Syndrome, identifying with their captor.”

For Weld, who last held elected office in 1997, riding to the rescue of the GOP is an unexpected role.  His most recent foray into American politics was as the Libertarian Party’s nominee for vice president, and he has long been at odds with the party’s conservative base.  In fact, Weld often notes that the Gary Johnson/Bill Weld ticket in 2016 took votes by a three-to-one margin from otherwise GOP voters. “A Libertarian vote was a protest vote or change vote in 2016. Those votes were going to go to Donald J. Trump not Hillary Clinton,” Weld said.

But Weld has returned to the GOP  because, he argues, Trump has put the country “in grave peril.”

Weld began his remarks to the crowd of New England business people and political insiders with a withering critique of President Trump, calling him a “schoolyard bully” who “virtually spat upon the idea that we should have freedom of the press,” and who “goes out of his way to insult and even humiliate ore democratic allies.”

“The situation is not yet hopeless,” Weld said, “but we do need a mid-course correction. We need to install leaders who know that character counts.

“As we move towards 2020 election we must uphold difference between the open heart, open mind and open handedness of patriotism versus the hard heart, closed mind and clenched fist of nativism and nationalism,” Weld said.

Weld laid out a series of his own policy proposals that were commonly heard in GOP circles in the 1990s but are rarely advocated today: a 19 percent flat income tax, baseline budgeting for the federal government and individual retirement accounts for “millennials who may never receive the benefits of Social Security.”  But it wasn’t Weld’s policy proposals that generated the massive media attention his speech received. It was the premise of a primary challenge against President Trump.

Weld repeatedly suggested that other candidates might enter the 2020 race, both as third-party candidates and as Republicans, which he clearly saw as a positive development.  When asked if his entrance into the GOP primary “would make the dam break,” Weld answered “If I get traction and cracks begin to appear, you may see a gold rush.”

This possibility—that Weld’s candidacy will open the door to a more traditional Republican challenger– may pose Weld’s most significant danger to Trump.  Trump’s poll numbers, both nationally and in key early primary states like New Hampshire, have actually risen in recent months.  Emerson College’s Director of Polling Spencer Kimball tells InsideSources that “We were just in the field in Iowa testing Trump vs. [Ohio Gov. John] Kasich and Trump was up 90-10 percent. It’s not going to be any easier there for Bill Weld.”

And in New Hampshire, which border’s Weld’s home state of Massachusetts, Trump’s approval rating among Republicans is 82 percent, and his approval among all Granite State voters has risen from 36 percent a year ago to 43 percent today in the latest NHIOP poll. When asked if they would encourage Trump to run for re-election in 2020, 77 percent of New Hampshire Republicans said yes.

Which may explain why multiple Republican strategists told InsideSources that they see little if any path forward for Weld in the Republican primary (“He misses on some of the attributes I think are needed to run a successful national effort,” New Hampshire-based GOP consultant Dave Carney tells InsideSources.)

Pollster Kristen Soltis Anderson of Echelon Insights says “Bill Weld is fighting an uphill battle on two fronts. First is that President Trump remains quite popular within the party, and rank-and-file Republican voters do not want to see a primary battle that could impair President Trump in a general election against a Democrat.

“Second is that Weld’s particular brand of Republicanism is now very rare in the party. Lots of voters in America are socially and fiscally progressive or are socially and fiscally conservative. But among those who ‘mix it up’ a bit, you find more people who are fiscally progressive but socially conservative – the opposite of a sort of ‘New England Republican’ formula.”

And even if the GOP base were in the mood to make a change, it’s hard to imagine the Republican Party of 2020 embracing Weld, with his history of pro-abortion and pro-amnesty policies, and his support for liberal politicians like Barack Obama and Hillary Clinton.

“The Republican Party is a big tent, but someone who endorsed Barack Obama in 2008 and 2012 and supported Hillary Clinton in 2016 as the Libertarian Party’s Vice Presidential nominee really needs to think about how welcome he is in the Republican Party,” said Steve Stepanek, chairman of the New Hampshire GOP.

“I don’t expect his campaign to get very far among Republican primary voters.”

Weld announced that he plans to stump across New Hampshire and other states in coming weeks, but emphasized that he has not made a final decision to run.

“If people won’t buy dog food, then I won’t advance,” Weld conceded. “That’s how it is in showbiz. If the dogs won’t eat the dog food, it doesn’t matter how good the promoter is.”