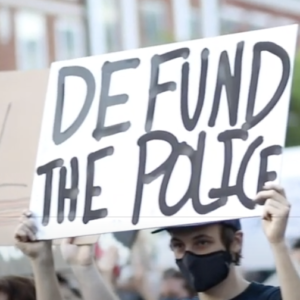 Seacoast Democrats are secretly backing a list of demands from the local Black Lives Matter organization, hiding their support due to “tight races,” a BLM official tells NHJournal.

Among those demands are a ban on school resource police officers at public schools, and tracking the personal social media accounts of all local cops.

On September 18, BLM Seacoast released a list of demands for legislative and local candidates, then hosted an event the following Saturday for candidates to sign a pledge to support those demands. Only a handful of legislators or candidates attended, but according to Seacoast Black Lives Matter Executive Director Clifton West, Jr., many more have privately told him they support his organization’s demands.

“I have personally had conversations with them to see whether they support the measures or not. A lot of them do. So that’s very good to hear,” West told NHJournal.

“Some candidates just can’t do it due to political reasons. A lot of close races and they need the votes . . . A lot of these candidates are in very tight races. They can’t really openly support due to the image,” West said.

According to William Tucker at the progressive website MiscellanyBlue: “Eight of the Seacoast House seats are rated toss-ups in the latest update: four in Rochester, two in Epping, and two in the Hampton/North Hampton area.”

None of those Democratic candidates or incumbents have signed the BLM’s pledge or attended the BLM event.

The pledge, created by the Seacoast BLM chapter, includes a wide range of demands:

Chris Rice, the Democrat running against incumbent GOP state Senator James Gray in a Seacoast district, agreed that tight races are keeping Democrats from supporting the BLM agenda in public. “I do [think that’s true],” he told NHJournal. He also acknowledged his own reservations about some of the proposals.

“I’m against removing the school resource officers completely, but I think we can provide better guidance. Do we need someone wearing a police uniform in our schools? No,” Rice said.

Proposals limiting the powers of — or in some extreme cases, “defunding” — police may inspire progressive activists, but polling shows they’re politically unpopular, both in New Hampshire and the nation at large.  A St. Anselm College poll in June found 85 percent of Granite Staters approve of the job their local police are doing, rating them as very or somewhat professional.

A new USA TODAY/Ipsos poll revealed roughly two-thirds (64 percent) of Americans are worried that protests are overwhelming American cities. And 56 percent of those surveyed believe the government should deploy more police to get riots under control.

One Seacoast Republican, former state Rep. Joe Hannon of Lee, who is running to regain a seat he lost in 2016, both signed the pledge and spoke at Saturday’s rally.

West tells NHJournal he expects more candidates to sign up in the coming days.

Despite a statement of support from the New Hampshire Democratic state Senate caucus, however, not a single state senator or candidate has signed the BLM document. Only one, state Senator David Watters (D-Dover), made an appearance at the Seacoast BLM event on Saturday, and he refused to sign the pledge.

Among the no-shows was Sen. Tom Sherman (D-Rye), who’s GOP opponent Lou Gargiulo was endorsed by Gov. Chris Sununu in the Republican primary. Their race is viewed as one of the most competitive in the state.

“I believe in justice for everyone and I support the First Amendment right to protest,” Gargiulo told NHJournal. “But I support defending the police, not defunding them. And I support keeping school resource officers, not banning them.

“The officers in our schools had a positive impact on my children’s lives and who knows how many others. So no — I won’t be signing that document,” Gargiulo said.

Sen. Watters rejected the idea that he and his fellow Democrats were backing away from BLM demands out of concern over electoral consequences. Instead, he said there were issues regarding ‘Constitutional conflicts,’ ‘lack of due process,’ and ‘unfunded mandates’ that he says need to be resolved.

Though he refused to sign the pledge, Watters told NHJournal he was working directly with Black Lives Matter Seacoast to address their concerns in legislation in the upcoming session. “By turning words into action . . . that’s what I can do.  That’s what my word and pledge is,” said Watters.

Kate Day, a member of the New Hampshire Republican Party’s Executive Committee, said if Democrats have made secret promises regarding positions they plan to take after the election, in particular regarding the treatment of police officers, they should disclose them now.

“Democrats in New Hampshire need to make it clear where they stand,” Day said. “Do they agree with the BLM list of demands that remove police officers from our schools, open our law enforcement officers up to personal lawsuits, and make our communities less safe? Or do they support our men and women serving on the thin blue line?”

UPDATE: An earlier version of this article omitted the names of Rep. Cam Kenney and former state Rep. Joe Hannon from the list of signatories to the pledge. NHJournal regrets the error.

Yvonne Dean-Bailey is a writer and native Granite Stater and served in the New Hampshire House of Representatives as the Vice Chair of Election Law in 2015 to 2018. She wrote this for InsideSources.