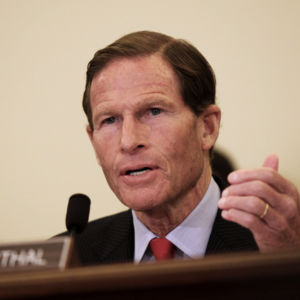 The Obama administration “must do better” deporting felons who immigrated to the United States illegally, Connecticut Sen. Richard Blumenthal, a Democrat, said Thursday.

The senator used a Judiciary subcommittee hearing to grill U.S. Immigration and Customs Enforcement (ICE) about the case of Jean Jacques, an undocumented immigrant from Haiti who stabbed a 25-year-old woman named Casey Chadwick to death in Norwich, Connecticut.

Jacques previously served a 17-year prison sentence for attempted murder in the same city, but wasn’t deported following his release.

“Unfortunately and inexplicably and inexcusably, he was never removed from the United States,” Blumenthal told ICE official Thomas Homan.” Instead he was released from ICE custody, and that release allowed him to murder Casey Chadwick.”

Homan said Chadwick’s murder was a “terrible tragedy,” but argued the real reason Jacques remained in the country was Haiti refusing to issue travel documents for him.

“I disagree that he could not have been deported, that sufficient measures were taken to compel Haiti or persuade that nation to take him back,” the senator said.

Blumenthal noted that he joined two Democratic colleagues from Connecticut, Sen. Chris Murphy and Rep. Joe Courtney, in demanding an investigation by the Department of Homeland Security, which Blumenthal said “should be done immediately.”

He said he hopes “anyone responsible for the failure to deport Jean Jacques will be held accountable,” but confessed that information he’s received from ICE so far just made him more concerned the agency didn’t do enough about the murderer.

At one point, the senator added that “before long, we will reach the conclusion that Congress needs to be involved to assure that dangerous law-breakers are repatriated to their countries.”

Blumenthal’s tough talk for the Obama administration made concern about the president’s approach bipartisan at a hearing entitled “Declining Deportations and Increasing Criminal Alien Releases – The Lawless Immigration Policies of the Obama Administration.”

Alabama Sen. Jeff Sessions, a Republican, pinned Homan down on the idea that ICE receives daily calls from police across America, but doesn’t deport certain undocumented immigrants under orders from Obama.

“You have ’em to deport, but you have policies that tell you not to deport whole categories of people that are here unlawfully. Isn’t that correct?” Sessions asked.

The politics of these issues are particularly nuanced for Democrats. They’re broadly committed to opposing deportations of undocumented immigrants who haven’t committed crimes since arriving in America – some of which Obama continues to pursue. At the same time, politicians like Blumenthal, with constituents harmed by bad actors, are left asking for answers.

“Whether it’s visa restrictions or some other steps, the United States of America needs to make sure that we are protect from people like Jean Jacques,” the senator said. “We can agree that it was a tragedy, but we should also agree that stronger action should be taken because it will happen again if the nation fails to take that stronger action. Having talked to that family, one of my missions in this job will be to do everything possible to make sure that their grief and sorrow is in some way an inspiration for us.”