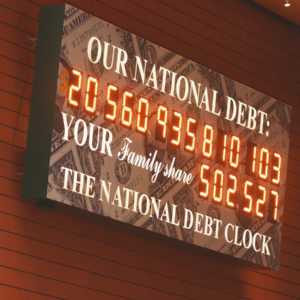 MOORE: Borrowing Trillions to Bail Out States’ Bad Decisions Would Do More Harm Than Good

As our nation grapples with the reality of COVID-19, we must come to grips with another devastating threat — our national debt.

With our nation expecting to borrow $3 trillion in this quarter alone, pushing our overall debt over $25 trillion, some states want to compound this economic harm by asking federal taxpayers to bail them out from decades of bad choices.

It is time for some true leaders to step up and say “no.”

Illinois legislative leadership requested a $44 billion bailout, with $10 billion going directly to plug holes in their pension fund, which has been chronically mismanaged for decades. Illinois’ budget for the current fiscal year is $40 billion, making that state’s bailout request $4 billion more than they planned to spend for the whole year.

These are just some of the examples of states whose precarious fiscal situations have been simmering for years and are conveniently using the pandemic as a means to have someone else temporarily fix their mistakes.

This is particularly true given that states have already received $1.8 trillion in aid from the federal government to pay for expenses related to COVID-19.

While some states are looking to have the federal government solve their long-standing problems, there’s no reason why New Hampshire taxpayers should have to foot the bill for other states’ irresponsibility.

Here in the Granite State, after the recession of 2008-09 , the state took its medicine, passing a budget in 2011 that reduced total state spending by 11 percent and state general fund spending by 18 percent.

These were tough choices, but they set the state on a path for prosperity, allowing it to reduce business taxes, which, in turn, set the state up for having a booming economy.

That same year, New Hampshire overhauled its pension system, moving the state toward finally having a fully funded, sustainable system that would not weigh on the backs of future generations.

The state also grew its rainy day fund by more than 12 times what it had been in 2011, leaving it far better prepared for any revenue shortfall caused by this pandemic.

Other states like New Jersey, California and Illinois, should follow the same template. Using this time to fix their fundamental, structural problems will leave them far better positioned for the future than simply trying to put a federal Band-Aid over a gaping wound that’s been festering for years.

These states argue that they pay more to the federal government than they receive. New Hampshire pays more than our state receives, but we don’t have the same structural problems of these big spending states.

Why should we be asked to pay for their mistakes?

Granite Staters are willing to do our part, in a national effort, to help America recover from COVID-19. What we aren’t willing to do is subsidize other states’ bad decisions because they don’t have the courage to fix their mistakes.

We did it, and they should do so, too.

A better strategy would be for the U.S. Congress to give states the flexibility to spend the dollars that the federal government already sent them — including the funds from the CARES Act — to use to meet individual states’ needs. Let’s cut through the red tape from Washington and let state and local governments make the best decisions about how they should recover.

New Hampshire’s congressional delegation should speak out against these efforts. It’s time for Reps. Chris Pappas and Ann Kuster to push back against Speaker Nancy Pelosi’s untenable and reckless plan to spend another $3 trillion, the largest portion of which would be state bailouts.

Greg Moore is state director of Americans for Prosperity-New Hampshire.