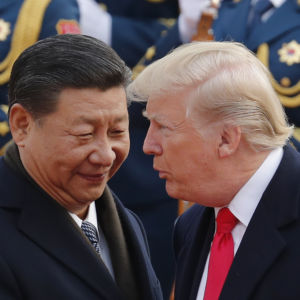 Despite Recent Tensions Between China and U.S., Branstad Positive on Business Relationships

U.S. Ambassador to China and Former Iowa Governor Terry Branstad assured both U.S. and China business professionals, students, and dignitaries that “progress has been made” on the relationship between U.S. President Donald Trump and Chinese President Xi Jinping, several days after the Trump Administration criticized China’s economic policies in its National Security Strategy.

Last week, the Trump Administration released its National Security Strategy, which criticized the Chinese government for designing economic policies with the aim of weakening America.

In a prepared statement from the Chinese Embassy in Washington, D.C., the Chinese called the U.S. strategies and policies “contradictory.”

“On the one hand,” the statement said, “the U.S. government claims that it is attempting to build a great partnership with China. On the other hand, it labels China as a rival. The self-contradictory rhetoric of the U.S. betrays the truth that China and the U.S. are becoming increasingly interdependent and have growing intertwined interests. The U.S.’ rhetoric also runs counters to China’s efforts to cooperate with the U.S. on bilateral and global issues.”

Branstad spoke at the Iowa-China Business Forum in Des Moines on Friday, December 22, stating that the “chemistry” between the two leaders is “very good,” but there are issues that still need to be resolved.

“There are some frictions but my hope is we can overcome those,” Branstad said. “I think one of the big concerns is that with regard to the fact that both China and Russia are certainly building their military strength and we want to make sure that the U.S. continues to be an important power in the Pacific. That’s one of the issues that America is concerned about in protecting its own national security. President Trump wants to make sure America looks out for its own interests as every country has the right to do.”

Branstad took limited questions at the forum which was meant to discuss future U.S. relations with China under the Trump Administration.

On trade, Branstad said that there are “still issues that need to be resolved,” but expressed that the the U.S. is hopeful that it can increase its exports to China, and decrease tariffs. Branstad said that with the recent signing of tax reform legislation, more companies will want to locate facilities in the U.S., which will help reduce the trade deficit. He believes that more European companies will follow suit of Mercedes and BMW in establishing a strong base of operations in the U.S.

Kentucky Governor Matt Bevin, also in attendance at the forum, applauded the Chinese relationship with the U.S., as well as its relationship with Kentucky. Bevin stated that in 2015, there were 44,000 U.S. employees working for Chinese-owned companies in the states. He also stated that China was the fourth largest trading partner with Kentucky, behind France, the United Kingdom, and Canada, stating that the state will export between $2.5-$3 billion worth of goods and services to China.

Both Branstad and Bevin’s comments seemed to at times be in direct contrast to Trumps opinion on China, not only in the White House but also on the campaign trail. Trump has been aggressive on China’s economic policy and global strategies, calling the government a “currency manipulator” and an “enemy” to U.S. industry. Back in August, Trump signed an executive memorandum to launch investigations into China’s investment and trade practices.

“I will say as a governor [of Kentucky],” Bevin said, “the president we have is a business man. He understands the nature of global business. Behind the tweets and the comments that get people’s attention, he has done business all over world.”

Many pundits have said that Trump’s actions could signal a shift away from 30 years of promoted economic engagement. Others say that it could be a U.S. strategy to encourage China to take action against North Korea, which Branstad said was a priority of the Chinese.

“The [United Nations] Security Council is debating a resolution dealing with North Korea,” Branstad said. “China has supported past resolutions over the last six months to tighten sanctions on North Korea, and working to enforce that and trying to convince North Korea to denuclearize.”

Branstad ended his comments on trade relations with China by stating that he’d like to find “win-win” outcomes for the two nations on both trade and other issues. Branstad highlighted China’s coordination with the U.S. in addressing the Ebola epidemic in Africa, China’s commitment to fueling cars with 10 percent ethanol by 2020, and taking action on fentanyl producers that are creating different strains of the drug which result in numerous U.S. deaths.