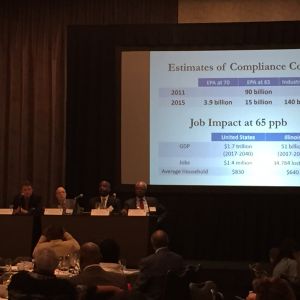 CHICAGO – Three major business groups warned earlier this week that Chicago and Illinois would suffer dire economic consequences if the Obama Administration implements a far-reaching proposal to reduce ground-level ozone, echoing concerns being raised by politicians and business leaders across the country.

The impact, the groups argued, would be especially damaging for economically beleaguered communities in urban areas that are already struggling to meet the current ozone, or smog, standards.

Under the proposed rules, states and  counties would be required to bring ground ozone levels, or smog, down to 65-70 parts per billion (from the current 75 parts per billion) or risk losing federal highway money. At the same time, many businesses warn that the cost of complying with the new standards will be enormous and likely force them to scale back.

“Our nation is starting to regain its economic footing and the EPA’s proposed rule will knock us back on our heels. States, cities and counties will be especially hard hit as they will shoulder the brunt of the economic burden resulting from this rule,” National Black Chamber of Commerce president and CEO Harry Alford said.  “And arguably, those most at risk of losing out on future economic growth and job opportunities are urban areas like Chicago that will be disproportionately impacted.”

Alford cited a National Association of Manufacturers report that found the new ozone standard would lead to nearly 35,000 lost jobs per year, a $640 drop in average household consumption per year, and $9 billion in compliance costs in Illinois alone.

The U.S. Chamber of Commerce argued that additional consequences of the new standard could include a slowdown – or complete stoppage – of manufacturing growth.

The Chamber also pointed to a graphic depicting a number of “negative impacts” the revised ozone standard would have on communities, more generally.  These include increased costs associated with agricultural production, costly controls on small businesses, expensive restrictions on vehicles and fuels, and the possible loss of federal highway funds for cities and states that do not comply with the standards.

A recently-released poll, sponsored by NAM, indicated 67 percent of Americans rate their local air quality as “excellent” or “good” and, by a 2-to-1 margin, respondents were more concerned with diminished economic and job growth than they were about pollution.  The event comes as nearly a dozen letters from Chicago-area elected and business leaders were sent to the White House, expressing concerns over the administration’s ozone rule and urging the president to cancel implementation of the new standard.

“The administration should be working with businesses to encourage them to expand and grow, providing good-paying jobs to Americans.  Instead, they continue to pile on another expensive regulation at a time when businesses, manufacturers and families are making a comeback,” Alford said.